Valentin Vornicu, a WSOP Circuit pro, sits atop the leaderboard after Day Two in the Main Event. Vornicu, from San Diego, bagged up 838,600 chips. His closest competitor Jamie Shaevel has 586,000 in his stacks. 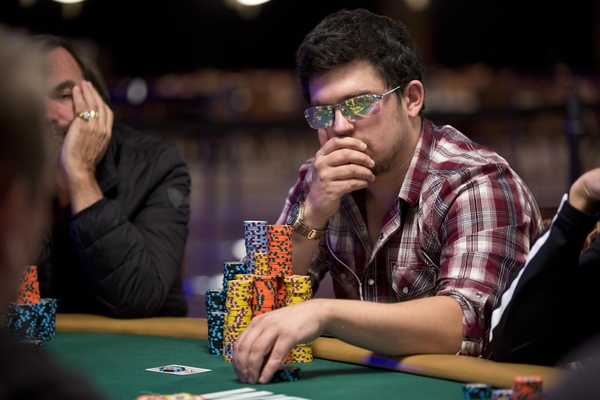 Vornicu has just 12 cashes, for $76,134 lifetime at the summer series. But don’t let that fool you. He is a highly skilled tournament player.

He’s won eight WSOP gold rings, which are awarded to winners of Circuit events. The record, held by Alexandru Mask, is nine. While Vornicu would certainly love to someday win his ninth, he would obviously be even more satisfied with a Main Event bracelet.

The most prestigious poker tournament in the world has now completed half of its second day. Day 2C will take place at the Rio in Las Vegas on Wednesday. On Thursday, all remaining players will come back for Day Three. The survivors should be in the money sometime on that day.

Howard Lederer and Chris “Jesus” Ferguson both made it to Day Two in the Main Event. On Day One, one player at Lederer’s table confronted him about what he’d done to harm the poker community during his time at Full Tilt. This wasn’t the first time the disgraced poker pros received harsh criticism at the 2016 World Series of Poker.

A player confronted Ferguson last week during a tournament. Both of these poker villains, to the delight of nearly everyone inside the Rio, busted on Tuesday. Ferguson entered and busted in the Little One for One Drop afterwards as well.

Despite being probably the two most hated men in the room, this duo was able to avoid many confrontations this summer. Overall, even though most poker players despise them, few made negative comments directly to their faces. Most of the bashing has been done via online forums and social media, including some choice words from Daniel Negreanu aimed at Jesus.

Greg Raymer was the only former Main Event champ to advance to Day Two on Tuesday. Many other former champs will have that opportunity on Wednesday. Raymer appeared to be up to his old ways on Day Two. He left the Rio with a solid chip stack (179,800). He dropped considerably from where he was earlier in the day, but still moved on with plenty of chips.

We were able to catch up with him, along with another former champ in Joe Hachem, earlier this week; look for our exclusive interview here on CardsChat later today.

Vanessa Selbst isn’t in as good of shape as the 2004 champion. Her chip stack fell to 55,600 after losing a huge pot on the final hand of the day. But Antonio Esfandiari went home feeling good. The Magician has turned a 50,000-chip starting stack into 327,400 by bag-up time.

Playing in the Little One for One Drop

Yours truly is not just a reporter: I play the game occasionally myself. Thus I competed in Day 1A of Event #69, the $1,000 Little One for One Drop, on Tuesday. After 10 grueling hours, I went home with 80,000 chips, which is well above average. Yay me.

The 2016 World Series of Poker has just six more days to go, as the Main Event whittles down a bit more on Wednesday. (Image: CardsChat.com exclusive)

The tournament is the smaller version of the $111,111 High Roller for One Drop event, won by the great Fedor Holz. There were 754 players registered for the first of three Day One starting flights on Tuesday.

I’ll be back on Friday, along with many others, to take a run at the final table on Saturday, and natch will keep you all posted on how I fare.

My stack fluctuated throughout the day, but I never dropped below my 10,000 starting stack. Fairly early on, I was up to 55,000. Then I lost a sick hand and fell back to 21,000. About 20 minutes later, I was up to 67,000. A player from Minnesota, a nice gentleman, built a massive chip stack and then bluffed most of it off to me.

William Hung busted at my table early in the day. Why does that name sound so familiar, you ask? Yes, it’s that hilarious guy from American Idol who became famous for his less-than-Pavarotti-ish voice singing She Bangs by Ricky  Martin at the 2004 Idol auditions.

I’m told he is a solid cash game regular these days in Los Angeles poker rooms. Hopefully, he’s given up the dream of singing, even in the shower.

There were some big name pros sprinkled around the tables in the Little One. Jason Mercier fired four bullets, but he needs to get some shooting practice. He busted all four buy-ins. Mercier will be back on Wednesday to give it another shot in this unlimited re-entry tournament. He’s still trying to win that elusive third bracelet and this is his last opportunity this season.

Brian Hastings, Kelly Minkin, Jarred Jaffe, and Max Pescatori all made it to Day Two. But, most importantly, so did I!

woow big stack for this player Valentin Vornicu have to play with their chips with any style of player but should to take care since it is still a long way to go and seek the dream of every juagdor poker have a bracelet big main event of the series world of poker.