If you’ve been waiting all summer for Phil Ivey to show up in Las Vegas to compete in a World Series of Poker event, you were sadly disappointed. Until now. Ivey finally came to the Rio on Monday to play in the Main Event, Day 1C, which was also the last day for entries. 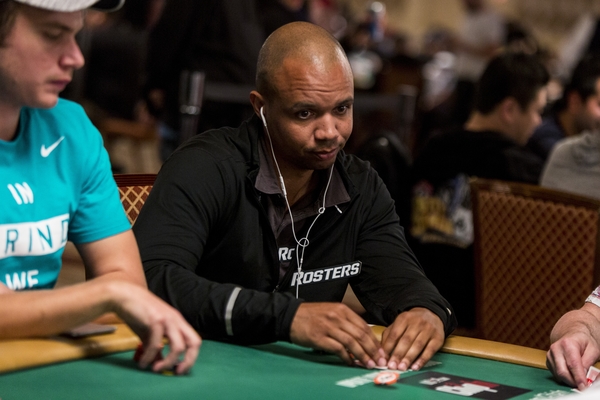 Phil Ivey finally made an appearance at the 2016 World Series of Poker, entering Day 1C of the Main Event. (Image: pokerphotoarchives.com)

Ivey couldn’t get much going on Monday, but he did make quite a comeback late in the day after being down to just 7,500 chips at one point. The great one bagged up 26,100 chips by day’s end, which was well below his 50,000 chip starting stack.

With almost $24 million in live tournament cashes, Ivey’s most recent bracelet win was over a year ago at the Aussie Millions for $2.2 million. His last WSOP bracelet was in 2014, when he took first in the $1,500 Eight Game Mix championship.

Day 1C had 4,240 players registered, including 2015 Main Event defending champ Joe McKeehen. That’s a record for any Day One starting flight, by the way.

Overall, 6,737 “kids with a dream” signed up for this prestigious poker tournament, the most since 2011. For those assuming poker is on the decline, head on over to the Rio these next few days and you’ll have a different opinion. That’s assuming you can find a parking spot that doesn’t include a 1/2 mile walk into the back of the casino.

McKeehen picked up where he left off in November. The reigning world champ ended Day One with 110,000 chips. He put on another great performance, but not nearly as great a one as Timothy Sheehan. The Georgia resident had bagged the biggest stack in the field (394,100) by end of day. 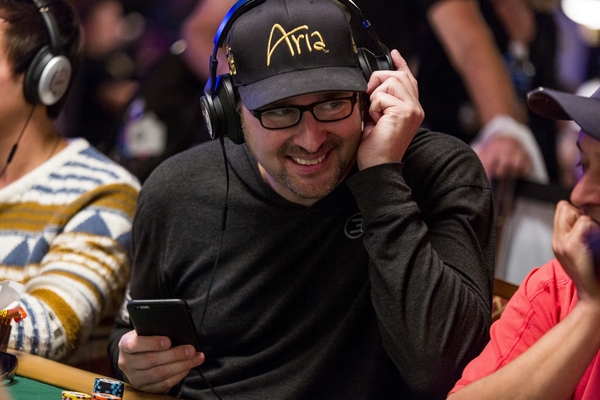 Phil Hellmuth takes a second from cell-phone checking to hear a player comment. Hellmuth, like many other top pros, entered the last Day One for the Main Event on Monday. (Image: pokerphotoarchive)

Hellmuth and Moneymaker were up and down all day, more on the down side for the Poker Brat.

At one point, Hellmuth was below 20,000 chips, but got things going late. Moneymaker had around 20,000 at the final break, but went on a heater to close out the evening.

This is an important tournament every year for Hellmuth, a 14-time bracelet winner. But maybe even more important this year, because he has struggled all summer. This is his last chance to win a bracelet in 2016 in what has been a disappointing year for the poker legend.

One More Shot for Mercier

Jason Mercier is down to his final opportunity to win that elusive third bracelet this year. He couldn’t get things going on Day One of the Main Event and hit the rails.

That leaves Event #69, the $1,111 Little One for One Drop, as his last shot to win gold. That tournament begins on Tuesday. There are three Day One starting flights: on Tuesday, Wednesday, Thursday.

Mercier is likely going to win Player of the Year, but he still needs a final first place finish to win his 180-1 bet with Vanessa Selbst.

There were 6,479 men who signed up for the Main Event, and just 268 women. Put down your calculator. We’ve done the math for you. The ladies represented just a shade under four percent of the entire field.

There are many people out there who promote the game to ladies of all ages, but it doesn’t seem to be working. Representing well for female poker players on Monday was Vanessa Selbst. She finished Day One with 133,000 chips.

The final six players in Event #66, the $1,000 WSOP.com Online Poker Championship, were a bit overshadowed by the Main Event on Monday.

But we still have to pay homage to Clayton “SLARKDUCK” Maguire for winning this unique event, and scooping his first career WSOP gold bracelet. He beat out a field of 1,247 players and won $210,279.

The event began online at WSOP.com, and then the final six players came to the Rio to compete live yesterday. Simeon Naydenov of Bulgaria finished 2nd ($150,569).

appeared only to play the Main Event, his game is the cash from high levels is more focused on making money in the casinos of Macao that a WSOP bracelet, but not quite agree on the tax they have to pay players WSOP hopefully how it goes this year’s Main Event the big phil ivey

Ladies Underrepresented – I’m a lady who’d love to play! Someone sponsor me 🙂