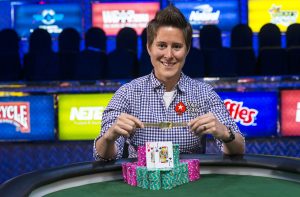 History was made on Day 4 of the 2014 World Series of Poker.

This history didn’t involve the largest field in a particular poker variation, however. It involved women’s poker, and one woman stole the show. Vanessa Selbst came back from a 5-to-1 chip deficit at one point in her heads-up match against Jason Mo, and she won her third WSOP bracelet. She became the first woman to win three open event bracelets in the history of the Series, and her winner photo with her wife and two dogs was a first for the game as well.

Selbst now sits with more than $10.5 million in live tournament earnings, extending her lead as the winningest woman in poker and moving into territory never before inhabited by a woman.

Other tournaments finished the night with big names like Phil Galfond and Kyle Cartwright with chip leads. Rails around tournaments have been impressive, as has been the poker action at the Rio.

Any tournament with a $25K buy-in is going to feature well-known players, but one respected player topped them all. Event 2 actually started with these figures:

Day 4 brought the final two players back for heads-up poker, with Jason Mo holding 5.86 million chips to the 3.96 million of Selbst. The two had some history together, as Mo had not been kind to Selbst on Twitter and elsewhere. Selbst also identified Mo as one of the men who played the WSOP Ladies Championship two years prior, which upset Selbst. It was not a friendly match.

Mo came out of the gate strong and chipped up to hold a 5-to-1 chip advantage over Selbst at one point. But Selbst doubled and quickly got back into the game. At some point, she got Mo’s number and soared, straight into the historic winner’s circle.

The largest non-Hold’em tournament in poker history had only six final tablists still in contention when Day 3 began. When it began, these were the numbers:

Steve Billirakis had a solid chip lead going into the action, with Brandon Shack-Harris in second on the leaderboard. Billirakis started strong by busting short-stacked Paddock in sixth place, but he suffered some setbacks as Shack-Harris soared. Ultimately, Billirakis exited in fourth, Iori Yogo took third, and Shack-Harris took the lead into heads-up play. After about an hour, Shack-Harris took gold.

The first of many $1K NLHE tournaments of the series, Event 4 began with these stats:

Day 2 had a long way to go, starting with 186 players. They were all in the money, though, and chip leader Alan Clunie fell and cashed out early. Players like Olivier Busquet and Andrew Lichtenberger exited throughout the day as well, and the late-night bustouts included Jamie Kerstetter and Jeff Gross.

The goal of finding the final table was not met, as 12 players bagged chips at the end of the night. WSOP Circuit superstar Kyle Cartwright led the pack. The top five chip counts were:

Another attempt at finding a final table fell short in Event 5. The play was intense with a lot of money and a championship bracelet on the line, so play went slower than anticipated. Let’s remember where it started:

Day 2 started with 54 players and did shrink the field. Late into the night, players like Matthew Ashton and John Hennigan departed, and the money bubble took some time. In the end, it was Jason Mercier who eliminated Tom Schneider in 13th place to open the money door and end play for the night.

The top five stacks going into the final day will be:

The tournament began with a glitch. It seemed that quite a few tables were short-handed with numerous dead stacks in play. Tournament Director Jack Effel quickly admitted it, stopped the clock, and rectified it before play continued. And when the field was set, the numbers were:

One of the first players to advance was Shannon Shorr, and others who followed throughout the day included Josh Arieh, David Benefield, and Mike Matusow. Finally, just after midnight, David Israelite became the winner of the last table going, and the night stopped. Most stacks are fairly similar for Round 2 on Day 2, but there are a few who will head in with more chips than others:

Some claim that Razz attracts the most miserable crowd at the WSOP. Others find it to be an entertaining game. All of them put together brought these numbers for Event 7:

Action featured players like Phil Hellmuth and actor James Woods, among numerous other familiar faces in the crowd. The chip counts reported at the end of the night for the 75 remaining players were not exactly final, but they were:

Events 4 and 5 will play to the final table and for the win.

Events 6 and 7 will try to reach their final tables.