The WSOP Main Event is the granddaddy of all poker tournaments. It’s the one event each year even the most casual poker fan simply can’t miss. Day 1A kicked off on Saturday at the Rio in Las Vegas with 764 entrants. Thousands more will register for the Sunday and Monday sessions. Like most years, most of the top pros avoid the first Day One session. 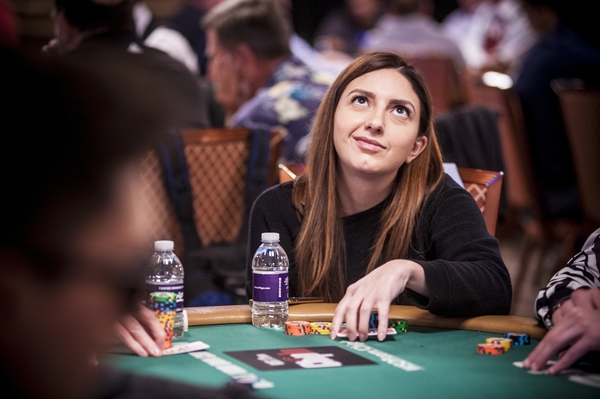 Not this time: Kelly Minkin, the 2015 Last Woman Standing in the Main Event, won’t be repeating that status this year. The Arizonan busted on Day 1A on Saturday. (Image: pokerphotoarchive)

But there were plenty of big name players to follow. Neil Blumenfield, a fan favorite at the 2015 final table, got off to a horrible start. He saw his 50,000 chip starting stack dwindle down to around 20,000 early on. Then he picked himself up off the mat and finished the day above 80,000.

David “Doc” Sands, a top high stakes pro, had a similar type of day, except his chip stack dropped all the way down to 10,000. But the Doc put on a clinic soon after. He also left the Rio with more than 80,000 chips.

Former poker pro-turned-Jeopardy-champion Alex Jacob made it through Day One, but has fewer chips than he did when play began (35,300). Jacob is a very intelligent guy and knows that this tournament isn’t won on the first day. It’s a long grind with seven days of play before the October final table.

Kelly Minkin, the 29th place finisher in this event last year, won’t be making another deep run. Her pocket kings ran into pocket aces late in the day and that was all she wrote.

Dan Shak, on the other hand, more than quadrupled his starting stack. Shak has 25 career WSOP cashes, but no bracelets. He’s off to a great start in the Main Event.

There are 567 players from the first flight moving on to Day Two.

What a Day for Dan Smith

Dan Smith, one of the best players in the game to have never won a bracelet, had quite a roller coaster ride on Saturday. His day began with a third place finish in Event #62, the $25,000 High Roller Pot-Limit Omaha for $487,361.

Jens Kyllonen won the bracelet and the $1,127,035 it came with. Then, he did what most would do after winning $1 million.

“Thank you so much for congratulations. Now towards the T-Mobile arena for some UFC and then going to get extremely wasted,” the Finnish champ posted on Twitter.

Smith wasn’t able to head over to the T-Mobile Arena with the champ to watch the UFC fights. That’s because he was busy crushing Event #67, the $111,111 High Roller for One Drop. He went straight on over to his seat in that tournament and went on a sick heater. Heading into Sunday, he is in the chip lead with 22,500,000 and 13 players remaining.

The 2015 Main Event champ Joe McKeehen didn’t register for the first Day One flight of the Main Event. He was preoccupied with his large One Drop chip stack. The world champ will enter Day Three with 7,160,000. Fedor Holz, Scott Seiver, and Antonio Esfandiari still have a chance to win this prestigious event as well.

Tony Dunst best-known for his World Poker Tour broadcasting duties, but don’t kid yourself, he knows how to play some cards. 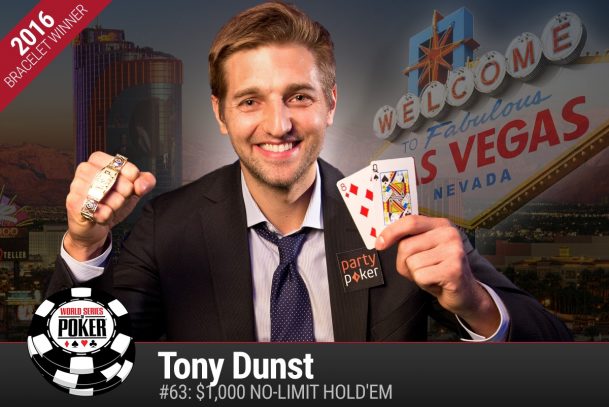 Tony Dunst proved he’s as good on the felt as he is behind a mic by taking down Event #63, the $1K NLH, on Saturday. (Image: WSOP.com)

Last but certainly not least, Event #65, the $1,000 Ladies No-Limit Hold’em Championship, will play down to a winner on Sunday. There are nine remaining players. Wendy Freedman from Las Vegas is the chip leader.