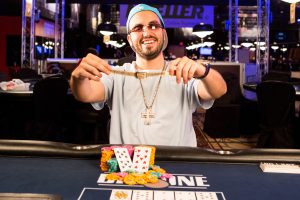 Bryn Kenney captures one of the last pre-Main Event gold bracelets of the 2014 WSOP. (Image: WSOP)

The Rio in Las Vegas is still full of pre-Main Event excitement. The $10K PLO Championship has nearly two dozen names, many well-known to poker fans, still in contention for the World Series of Poker title. And the Little One for One Drop rolls on with its attempt to whittle down the massive field to just a few tables.

The big story of today, however, will inevitably be the start of the 2014 WSOP Main Event. Players will gather at the Rio to buy in to the $10K No Limit Hold’em tournament in the hopes of making poker history, as this is the first year that the WSOP had placed a guarantee on the top prize. The winner in the Main Event is promised a minimum of $10 million, though a bigger field could push that number even higher.

There are three Main Event starting days, and today is the first. Look for big numbers today as the tables fill with hopeful players, all of whom are looking to become the 2014 world champion of poker.

The last $1,500 NLHE event of the summer started with these numbers:

Day 2 took the field from 293 to 24, and Day 3 moved on to and through the final table. However, the heads-up match between Brandon Hall and Salman Jaddi was so intense that it went on for more than three hours and required even more time.

The unscheduled Day 4 brought those two players back to finish what they started. Jaddi had the chip lead when play resumed and soared even higher. Hall doubled to stay alive, but Jaddi did the deed and won the tournament.

The last low buy-in tournament of the Series was the Little One for One Drop, the tournament that cost $1,111 to buy in with $111 of it going to the One Drop foundation. The action started with two starting days and these final numbers:

Day 2 took place on Friday and collected 885 players back at the tables to play down to the money. That happened midway through the day and guaranteed players at least $1,780 for their work. Some of the first players to cash were Dan Heimiller, Amanda Musumeci, and Carlos Mortensen.

Later in the night, other players like Todd Terry, Paul Volpe, and Emil Olsson also exited. With payouts at $3,650 and 102 players still in action, the clock stopped. The top five players on the leaderboard at that point were:

Today is supposed to be the final day of play, but it seems unlikely that the field will diminish enough to find the final table and play all the way through it. Most expect that there will be an extra day added in which to complete the tournament.

The popular 10-Game Mix event started with these numbers:

By Day 3, only nine players returned for action, but they were still a few away from the final table. David Blatte was the short stack and exited first for $10,152, and Haresh Thaker followed for $13,576. Michael Mixer then bubbled the official final table with a seventh place departure worth $13,576.

The final table got underway with Randy Ohel and others leaving early, and Bryn Kenney completely took over. He had a substantial lead in three-handed play and going into heads-up against the original day’s chip leader Jan Suchanek. The latter mounted a comeback during the Stud-8 round, but Kenney finished him off in No Limit Hold’em to collect his first WSOP bracelet.

The last of the WSOP tournaments before the Main Event was this championship PLO, which saw a solid turnout, even better than the year before:

Day 2 of the tournament brought 132 players back to the tables, and the money bubble burst much later in the evening with Heather Sue Mercer as the first player to cash for $18,585. Others who cashed included Phil Laak, Ludovic Lacay, Chance Kornuth, Dermot Blain, Steve Billirakis, and Artem Litvinov.

After Tom Hu exited in 24th place for $28,290, play stopped with 23 competitors bagging their chips. Names like Alex Kravchenko, Matt Stout, JC Tran, Sam Trickett, and David Williams were still in the event, but these were the top five on the leaderboard:

On Tap for July 5

Event 62 will play its third day in the hopes of finding or nearing the final table.

Event 64 will attempt to reach its final table and play it through to completion.

Event 65, otherwise known as the $10K NLHE Main Event, begins today at noon with the first of three starting days.