Doug Polk likely became the first player ever who wasn’t present at the time he won a WSOP gold bracelet. He was busy competing in Event #67, the $111,111 High Roller for One Drop, at the time his teammate Ryan Fee finished play in Event #61, the $1,000 Tag Team No-Limit Hold’em. 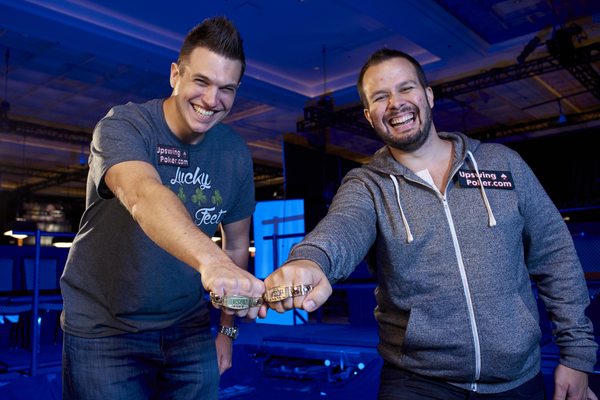 Doug Polk and Ryan Fee were the top duo in Event #61, the Tag Team NLH championship, on Friday. (Image: pokerphotoarchive.com)

Both players received a bracelet. The tournament began with 2,000 players among 863 teams. This was the WSOP’s first team event in 33 years, but it might come back into the roster going forward, as most participants seemed to enjoy the event.

But no one enjoyed it more than Polk and Fee, for obvious reasons. The pair each received $76,679 for first place. The runner-ups, Niel Mittelman, Adam Greenberg, and Gabriel Paul, took home $31,583 apiece.

Fee, a professional poker player and coach, won his first bracelet on just his third career WSOP cash. Polk, one of the top high-stakes pros in the world, now has a pair of gold bracelets.

88 Remain after Day One in One Drop

Things didn’t go quite as well for Polk in the High Roller for One Drop. After getting off to a great start, he couldn’t even make it out of Day One. Polk surpassed 1,200,000 chips at one point (players started with 500,000), but ran into a sick three-way hand against Liv Boeree and Koray Aldemir late in the day.

Tommy Le has 8,650,000 chips. And Dan Smith is in 3rd place with 3,425,000. Smith is one of the best active players in the world without a WSOP bracelet. He’ll need a strong comeback on Saturday to take his name off that list.

The Mizrachi brothers, Michael and Robert, had a rough day on Friday. Both ended Thursday’s action with huge chip stacks, but couldn’t get anything going on Day Three. Michael busted in 12th place and Robert went out in 9th.

Day One of the 2016 WSOP Main Event, the greatest poker tournament of the year, begins on Saturday. There are three total Day One flights beforee Day Two begins on Tuesday.

There are many interesting story lines to follow during this year’s Main Event. Will Phil Ivey finally show up to the Rio? Will Joe McKeehen, the defending champ, complain about having to wake up in time to play at 11 am? Will any big name pros make the final table? We’ll be following and reporting on all the action, of course.

Event #66, the $1,000 WSOP.com Online Poker championship, is down to six players. Play began on Friday online, but the remaining six players will come to the Rio to finish things off on Monday live. Clayton “SLARKDUCK” Maguire is the chip leader.

Other than the Main Event, no new tournaments will begin until July 12, when Event #69, the $1,111 Little One for One Drop kicks off.