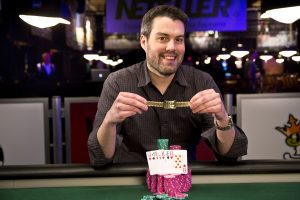 The Little One for One Drop completed its field yesterday, while the Stud championship played out an epic heads-up battle between Matt Grapenthien and Todd Brunson for a 2014 World Series of Poker bracelet. With substantial rails for both players, including Doyle and Pam Brunson for Todd, the excitement took over. Brunson eventually lost, and Grapenthien was able to pose with his own WSOP bracelet for photos.

The last $1,500 NLHE tournament was supposed to wrap yesterday, but that contentious heads-up match never ended, so the two finalists will continue to fight it out today.

Other tournaments are wrapping up today and tomorrow, as the WSOP staff prepares to kick off the Main Event tomorrow. The first of three starting days is on Saturday, July 5, and will bring players in from around the world. As always, it will be thrilling.

Stay tuned as we keep track of it all for you…

What was supposed to be a three-day tournament has become four, and it all started like this:

Day 2 thinned the field from 293 players to just 24, but that left a hefty task for Day 3 to play all the way through. Play did move along, with Scott Baumstein out in 24th place for $17,577 and others following like Ty Reiman, and Jamie Armstrong. The 10th place elimination of Matt Alexander for $35,327 set the official final table early in the day.

The final table played on as the day’s original chip leader, Steve Sung, exited in eighth place, and Cherish Andrews took fifth place. After Zachary Gruneberg exited in third place for $270,299, heads-up play began with Brandon Hall holding more than a two-to-one chip lead over Salman Jaddi. But the latter made a comeback during an epic battle that lasted more than three hours. Finally, play stopped late into the night with these chip counts, and they will return today to play it out:

One of the last championship events on the schedule began with these numbers:

Day 2 took the already-small field from 57 players down to the unofficial final table of nine. Day 3 started with the ninth place elimination of Jesse Martin for $26,299 to set the official table in motion.

The two battled back and forth for nearly five hours, until Grapenthien seemed to have control. Brunson lost out on a second bracelet, and Grapenthien took his first.

The second starting day of the Little One for One Drop was as crazy as the first, with players taking advantage of the unlimited reentries in grand fashion. With $111 of each buy-in going to the One Drop charity and the rest going to an ever-growing prize pool, the final numbers were finally announced late in the day on Thursday:

Though the entries didn’t match up to the final tally of 2013, the field was still substantial and played until late into the night. When all was said and done and chips counted, there were 885 players who would be going into Day 2. But since a complete list of player stacks for the two starting days wasn’t available, here are the top five finishers from Day 1B:

This 10-game mix brought in substantially more players than the previous year, resulting in these numbers:

Day 2 brought 85 players back to the tables, and played for some time before the money bubble burst. Payouts then began at $2,703, at which point players like Jeremy Ausmus, Scott Clements, and Phil Laak headed out the door. Others who cashed throughout the evening included Chris Klodnicki, Andreas Hoivold, James Carroll, Mark Gregorich, Justin Bonomo, Victor Ramdin, Marcel Luske, Tom Koral, and Allen Cunningham.

After the late-night elimination of Stuart Rutter in tenth place for $10,152, there were nine players bagging chips for the night. Their chip counts were as follows:

The last tournament prior to the start of the Main Event was also a championship event and the last chance for a non-Main Event bracelet. That brought a solid group of players to the tables:

The first day of play cut most players out of the game, and only 132 of them were able to bag chips when play stopped. Of them, the top five were:

On Tap for July 4

Event 60 will resume heads-up play and continue until one player wins.

Event 62 will play its third day in the hopes of finding the final table.

Event 63 will play out until a winner is determined.

Event 64 will attempt to reach its final table.

There are no new events until the Main Event begins tomorrow!