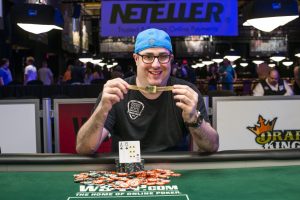 The Big One for One Drop may have finished on Tuesday, but Wednesday brought the Little One for One Drop that everyone can enjoy. As the only tournament of the summer with unlimited reentries, the $1K NLHE tournament drew thousands of players to the tables. Many of them reentered, and it was a frenzy of action for the first four hours.

When things settled, the numbers were significant, but another starting day remains. Players who busted yesterday may reenter again today, and there will surely be a period of reentry madness to start the action.

Many members of Team CardsChat are playing the Little One for One Drop today, and some of them did yesterday as well. We will update when all of the reentries are done and some final numbers emerge.

By Day 3, only 10 players were left in the tournament and Jared Jaffee was at the top of the leaderboard. Action started with three tables and was reduced to two tables of four after Michael Colman and Gustavo Kamei exited for $27,509 each. Subsequent eliminations of Anton Smirnov, Jeff Gross, and Brandon Cantu for $53,614 each set the final five at one table, and Xiao Peng’s fifth place exit for the same amount set off heads-up play.

Jared Jaffee then proceeded to defeat Joseph Alban, and Mike Watson eliminated Mark Herm. The third and fourth place finishers each won $126,882. Jaffee and Watson then battled. Jaffee had the initial lead, though Watson fought back and took it away briefly. But Jaffee remained strong and defeated Watson in just under 100 hands.

The Omaha event that began on Monday did so with these numbers:

There were still 20 players in the tournament when Day 3 began, and players like Mike Leah and Justin Bonomo were among the first to depart. Melissa Burr eventually exited in 13th place for $14,122, and the tenth place bustout of Don Zewin for $17,828 set the official final table.

Ismael Bojang was the table’s chip leader, but he lost ground along the way, as did big names who exited early like Jordan Morgan, Matt Glantz, and David Williams. Bojang exited in fourth. Phillip Hui was at more than a three-to-one chip deficit going into heads-up play, but he mounted a strong comeback and took that momentum to the winner’s circle.

It was the last of the $1,500 NLHE events and well attended with these final numbers:

Day 2 brought 293 players back and quickly moved into the money to guarantee players at least $2,802. Later in the day, players like Paul Berende, Layne Flack, Joe Tehan, and Dutch Boyd departed, and the night ended with 24 players still in contention for the bracelet. Names like Ty Reiman and Cherish Andrews were among them, but these were the top five:

The latest championship event turned out to be a small but stacked one:

Day 2 brought 57 players back to the tables, and it wasn’t until late in the evening that the bubble neared, though not before players like Gary Benson, Fabrice Soulier, and Cyndy Violette exited the field. Vladimir Schemelev busted on the money bubble, and Oxana Cummings was the first player to cash for $16,932 in 16th place. Shirley Rosario followed, as did John Cernuto and Barry Greenstein. Richard Ashby then exited in tenth place for $26,299 to end the night.

The unofficial final table of nine was then stacked as follows:

Days after the completion of the Big One for One Drop, the Little One for One Drop was on tap. It offered players a much more reasonable buy-in of $1,111, which $111 of each one going to the One Drop charity. The tournament boasted of unlimited reentries during the first four levels of play, along with two starting days. The first of those was on Wednesday and brought in these numbers:

The reentry period was quite exciting, as many players bought in, busted, and reentered. Some did it multiple times. Official chip counts were not available at the end of the night, but it looked as if 351 players made it through. These five had the largest reported chip stacks:

The notion that mixed games are becoming more popular was no more evident than in this 10-game tournament with a low buy-in, which saw a significant jump in registration numbers from 2013:

When play stopped in the early morning hours, only 85 players remained, and these were the top five shown on the leaderboard:

On Tap for July 3

Events 60 and 61 will play on until a winner is decided.

Event 62 will play its second starting day and set the official prize pool.

Event 63 will play on in the hopes of setting its final table.

Event 62 Day 1B ($1,111 NLHE Little One for One Drop) will kick off its final starting day at noon, and Event 64 ($10K PLO) will get underway at 4pm as the last new tournament starting before the Main Event.