Oops, he did it again. On Wednesday, 34-year-old Brian Rast won the 11th edition of the prestigious $50,000 Poker Players’ Championship, Event #55, for $1,297,097. It was his second takedown of this tournament that boasts one of the toughest World Series of Poker fields each year. 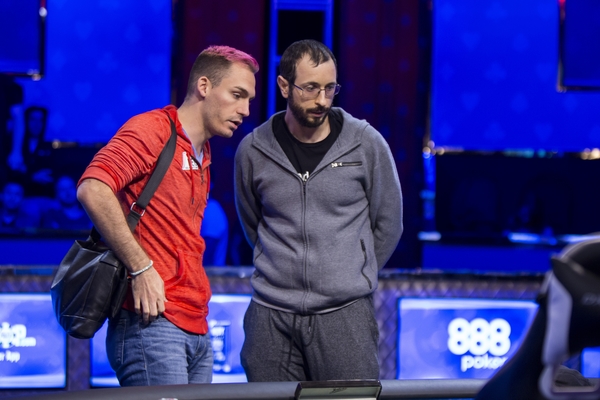 Speaking of Mizrachi, he was among the final six who returned on Wednesday to battle down to a winner. While he held the chip lead at one point, he ultimately fell in fourth place for $380,942. Both Ray Dehkharghani and Wil Wilkinson preceded him out the door in sixth and fifth place respectively.

After Eric Wasserson bowed out in third place for $545,772, Rast was left to do battle against Justin Bonomo, who had been among the chip leaders for most of the tournament. Bonomo began the match with the chip lead, but just like he did against the “Poker Brat” five years earlier, Rast held strong, battled back, and eventually dispatched his opponent. Bonomo earned $801,048 for finishing runner-up.

“This final table was really tough,” Rast told WSOP officials in his post-tournament interview.  “I was really low on chips for a lot of it.  The heads-up match was a really long battle. And, it was definitely satisfying. I would agree it was both my toughest and most satisfying win.”

Rast, who captured his third career WSOP gold bracelet, continued: “This is what I have chosen to do with my life. I would be dishonest if I were to say that I haven’t thought about my place in the game. I could have done a lot of things with my life when I was in my early 20s.

“I chose poker. And I do care. I don’t care what other people in the world think. But I care what other poker professionals think. I take poker seriously and where my legacy is and how my peers think of me is a measure of professional respect. What I was able to do today was really special.”

Event: #59, the $5,000 No-Limit Hold’em championship, originally began with 863 runners, but after the Day Two action, just 47 remain. Marius Gierse and his stack of 1.496 million are leading the way.

Day Three will kick off at noon PT on Thursday, with the goal of playing down to the final table.

Anderson, Shack-Harris Among Final 14 in Event #60

Day Two saw the money bubble burst, but dozens of players failed to finish in the top 79 and secure a payday. Among those to leave empty-handed were Mike Matusow, Barry Greenstein, and David Sklansky.

Action will resume at 2pm PT on Thursday and play down to a winner.

The historic return of a Tag Team event to the World Series of Poker saw 863 players take to the felt, but just 130 of them remained after Day One. Leading the way is the two-man team of Vladimir Geshkenbein and Tobias Ziegler, who bagged up 100,000 on Wednesday night.

According to the WSOP, some of the more interesting teams included poker pros Jeff Gross, Antonio Esfandiari, and Brian Rast, as well as Jonathan Little playing alongside his parents.

Also teaming up were TV host and infomercial king Montel Williams and 2006 WSOP Main Event champ Jamie Gold playing together for charity, and yours truly with my cousin from Wisconsin, Dan Almerli. The first two teams mention advanced to Day Two, while the latter two did not.

Huntress Leads After Day One of $25K HR PLO

Among those to fall on Day One were Isaac Haxton, Phil Galfond, Matt Glantz, JC Tran, and defending champ Anthony Zinno.

Registration for the event is open until the start of play on Thursday.

I wanted to win bonomo has been so close to the bracelet this year he deserves, that sick hand sick that board