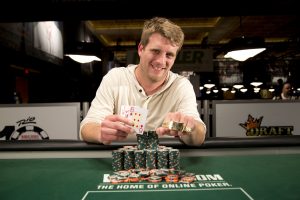 The big story of the day was the final table of the $1 million buy-in Big One for One Drop. All of the nine players who started the day were big names, and all had the ability to capture victory. But it all came down to two Daniels – the well-known fan favorite Negreanu, and the quiet high-roller Colman. Negreanu ended his run in second place and seemed happy enough with the finish, while Colman denied interview requests and simply won the biggest poker payout in the tournament world.

Mike Kachan also won a bracelet, though it didn’t happen in the spotlight or in front of cameras. It was clearly an important win for Kachan, though, and the 2014 WSOP gold bracelet was a prize he intended to share with his family.

Numerous events are still playing out at the Rio today, and the first of two starting days of the Little One for One Drop kicks off at noon.

Day 2 took the field from returned with 206 players through more pay levels down to 16 players. Day 3 brought them back with Ray Henson as the chip leader.

Michael Spegal exited first on the day for $14,407, and it was eventually Matt Salsberg who bubbled the final table, taking home $23,202 for the tenth place finish. Play moved on as Henson fell fast and took ninth place, while Mike Kachan stayed patient and moved upward. He took a bit of a chip lead into heads-up play with Jeff Blenkarn, finishing the tournament with a win in just a few hands.

The $1 million buy-in Big One for One Drop took three days to wrap but started with these numbers:

The second day of action had 31 players at the start but took it down to just nine finalists, one place from the money.

Day 3 started with Rick Salomon in the chip lead and Tom Hall as the first to leave, eliminated on the first hand of the day with no money to show for the effort. Play then continued with Negreanu rising to the top of the leaderboard. When Christoph Vogelsang exited in third place, Daniel Colman took a chip lead into heads-up play with Daniel Negreanu. The two battled back and forth, exchanging the lead several times, before Colman won.

The official registration numbers for the mixed max format of NLHE were:

Day 2 brought 181 players back to the felt for six-handed action and worked into the money for the top 162 fairly quickly. Players like Liv Boeree and Erick Lindgren cashed earlier in the day, and the night finally ended after Ferdinando Locascio departed in tenth place for $27,509.

The last 10 players standing were set for Wednesday with these chip counts:

Day 2 brought 180 players back and took quite some time to reach the money bubble. When it burst, Naoya Kihara was the first player to cash for $4,828, and others who followed included Dylan Linde, Stephen Chidwick, Brian Rast, Brandon Shack-Harris, Amnon Filippi, and Chino Rheem.

Play finally stopped with payouts at the $8,957 level and 20 players still in action. The top five on that list were:

Players took their last shot at this bracelet in big numbers, though only 293 of them made it through the day. They will return, and play will head directly into the money, with these five players starting at the top of the leaderboard:

One of the many new events on the 2014 calendar was this straight Stud event, for which the turnout was fairly mediocre:

The late-starting tournament on Tuesday brought many of the usual suspects to the tables, those with $10K in search of a championship bracelet. Only about 57 players made it through, and the unofficial chip counts showed these players as the top five:

On Tap for July 2

Events 58 and 59 will continue to and through their final tables.

Events 60 and 61 will attempt to reach their final tables.