On WSOP Day 35, it was finally starting to feel like Justin Bonomo wasn’t going to be denied this time.

Bonomo has already made three final tables at this year’s World Series of Poker, but has fallen just short of a win each time (with a 2nd and two 3rd place finishes). On Wednesday, he’ll return as he leads the pack of Event #55, the $50,000 Poker Player’s Championship (6 handed), which will play out to its conclusion today beginning at 2 pm Pacific time. 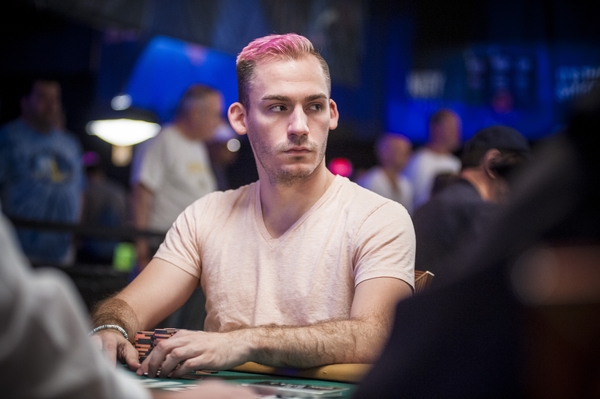 With 7,750,000 in chips, Bonomo is on top of one of the WSOP’s most prestigious events, with just six players left. But finishing the job won’t be easy.

To round out this table of talent will be Lamar Wilkinson (2,045,000) and Ray Dehkharghani, who has a massive hill to climb today with just 395,000 in chips, which is less two big blinds.

The tournament, which will pay the winner just under $1.3 million, started with 91 players, and everyone left is guaranteed at least $200,000. The final six have seven bracelets between them and a combined $15 million in WSOP career earnings, so this should be quite a table to watch.

Corey Thompson’s rail shouted to the heavens for a 9-ball on the turn to wrap up a WSOP bracelet for their guy in Event #58, the $1,000 No Limit Hold’em, on Tuesday night.

And a 9-ball is what they got. 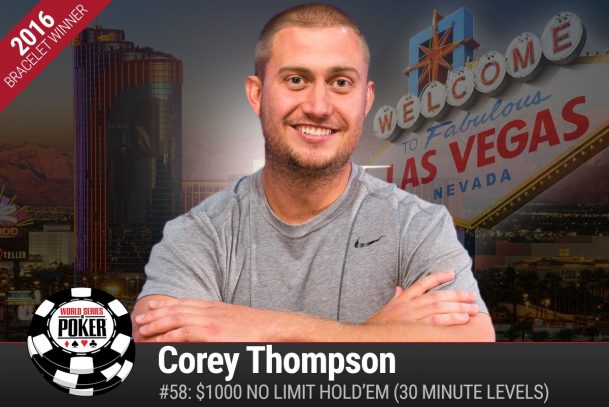 As a result, the Floridian pocketed $223,163 and his first career gold bracelet, just a few months after he won his premier major live event with the Heartland Poker Tour last fall for $131,720.

But the final hand for Thompson’s latest win is what may have been the most memorable.

Thompson held a nearly 4-to-1 chip lead over second-place finisher Enrico Rudelitz of Germany, who ultimately bagged $136,651 and his best career finish in a live event.

On the first hand after the heads-up break, holding A♠7♦, Rudelitz shoved all in and was called by Thompson with Q♥J♦.

The flop brought 10♠8♦2♠, keeping Rudelitz in the lead for the moment, but not for long. With Thompson’s rail shouting “Draw him dead!” and calling for a nine, the 9♦ fell on the turn and sealed it for Corey.

Rounding out the final table were:

David Peters was clearly sick of being on the “always a bridesmaid” list.

Peters, of Toledo, Ohio, reached his eighth career final table Tuesday night in Event #56, the $1,500 No Limit Hold’em championship. But this time, the self-taught pro would finish on top, as he finally won his first gold bracelet and $412,557.

Had Peters fallen short, he would’ve been that much closer to the unenviable WSOP record of 12 final tables with no win.

“I was definitely surprised it took me as long as it did (to win),” the man with 38 prior World Series cashes told WSOP.com. Peters beat out 1,859 other players, and it was no day in the park. “There were a lot of close calls,” he noted.

Rounding out the final-table finishers were:

New Jersey’s David Nowakowski has been making waves online for years. On Tuesday night, he made a big splash live, too.

“It’s a dream come true,” he told WSOP.com after the win. “It’s still all a bit surreal to me.”

Timothy Vukson ($125,507) and Marco Johnson ($87,192) finished in second and third place, respectively. Also of note was ninth-place finisher Matt Lefkowitz ($13,691), who made his seventh career final table, but was unable to break through with a win.

Four WSOP Main Event Champions are also still standing, including Martin Jacobson (73,600), Ryan Riess (48,800), Chris Ferguson (35,100), and Joe Cada (24,300). Ferguson, much to the chagrin of many, continues to prosper, despite remaining mostly to himself this year.

At 11 am Pacific time, Event #61, the Tag Team No Limit Hold’em three-day event will kick off at the Rio in Las Vegas. This one will run entrants $1K per team entered for the buyin.

if you want to start watching the 6handed game: https://www.youtube.com/watch?v=iw-fBFS-O6c

this bonomo guy that one place deserves its brazalate ah so close to glory great player, 3 final tables at the World Series of Poker this year, although the final table of this great event will not be walking easy esperemo today is the day of the long awaited bracelet to bonomo