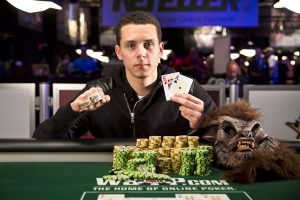 Two tournaments wrapped up on Monday at the World Series of Poker in Las Vegas, one being the five-day epic Monster Stack tournament. Hugo Pingray went from the original final table chip lead to the winner’s circle to collect more than $1.3 million. Asi Moshe took home a 2014 WSOP bracelet of his own in a higher buy-in NLHE event.

The Big One for One Drop continued to delight fans, media, and players with its playdown toward the money. Big names, including defending champion Antonio Esfandiari, exited the field with nothing to show for their $1 million buy-ins, and the night ended on the money bubble with nine players, only eight of them who are to be paid.

The excitement of the One Drop tournament will only increase exponentially today, so keep it locked here for all of the details tomorrow!

The five-day deepstack tournament finally came to an end on Monday, but it originally got underway with these numbers:

The fifth and final day brought nine players back to the table to play for the win. Original chip leader Hugo Pingray stayed strong throughout the action, but took more than a 2-to-1chip deficit into heads-up play against Joseph McKeehen. But Pingray fought back and emerged as the winner.

One of the recent $1,500 NLHE tournaments started with solid numbers:

Day 3 brought 17 players back to the two tables, and early exits included Tim West and Marc-Etienne McLaughlin. Georgios Kapalas was eventually ousted in tenth place for $33,219, and the final table played forward.

Asi Moshe took over when former chip leader David Jackson departed in fourth place, and despite a tough heads-up match against Michael Ferrer, Moshe took it down.

The latest of the $1K NLHE offerings brought these numbers into view:

Day 2 returned with 206 players, all of whom were in the money, and eliminated the majority of the field throughout the night. Some who cashed included Alexandre Gomes, Perry Friedman, and Loni Harwood. After Craig Rombough departed in 17th place with $14,407 in prize money, play stopped.

Of the 16 remaining players, Matt Salsberg was among them, but the top five on the leaderboard were:

There is no other tournament like it at the WSOP, or in poker in general. The $1 million buy-in Big One for One Drop had the fanfare and interest to prove it. Though the tournament had six fewer players than the previous event, the numbers were still mind-blowing:

At midnight, defending champion Antonio Esfandiari had a massive chip stack and sat in second place on the leaderboard behind Tom Hall. But he lost ground and ultimately risked his last chips with A-5 against the A-J of Tobias Reinkemeier to exit in tenth place. With only eight players paying, action continued with double-ups for Paul Newey and Scott Seiver.

Ultimately, play stopped with those nine players with these chip counts:

The mixed max format has become popular enough that it warranted a low buy-in event this year, and it garnered these registration figures:

The first day of play thinned the field down to just 181 players, a few places outside of the money. The official chip counts reported these as the top five on the leaderboard:

This Omaha event offered a reasonable showing for the late-afternoon tournament:

The first day eliminated a great many players, with only 180 bagging chips at the end of the night. Of them, the top five stacks were listed as:

On Tap for July 1

Events 56 and 57 will continue to and through their final tables.

Events 58 and 59 will attempt to reach their final tables.