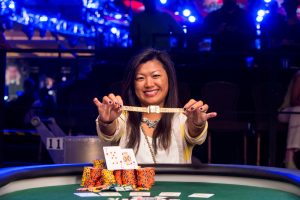 The Rio in Las Vegas was buzzing on Sunday. Of course, the Monster Stack event was playing down to its final table and there were other big NLHE events playing out as well. But the primary buzz was around the Big One for One Drop, where a few dozen players plunked down $1 million each to play a poker tournament.

Some of the buy-ins went to the One Drop charity, but the ESPN cameras were focused on the poker pros and businessmen who were willing to compete for the highest stakes in the game of poker. Vanessa Selbst became the first woman to enter in the tournament’s two-year history, but she was also one of the early eliminations from the game. The action was a poker fan’s dream, and no one could seem to get enough of the biggest game in the world.

Stay tuned for a recap of today’s developments.

This massive deepstack tournament began on Thursday with these numbers for what became a five-day event:

By the start of Day 4, only 62 players remained, and payouts started at $21,758. Some who headed to the cashier cage throughout the day included Jessica Meir, Chris Bolek, and Jason Duval. Late into the night, it was the tenth place elimination of Robert Gustafsson for $99,981 that set the final table.

The last day of the epic event will begin with these players and their chip stacks:

With a 90 percent discount for ladies, Event 53 had no male participants and final registration numbers as follows:

Day 2 thinned the field from 101 players to the final nine. They returned on Sunday to play for the win.

Action was fairly quick, and fan favorite Patty Landis, personal assistant to Daniel Negreanu, finished fifth. Mikiyo Aoki came into the day with the chip lead and made it to heads-up play against Haixia Zhang, but the latter ran away with it and captured victory.

This well-attended event started with these numbers:

Day 2 brought the number of players from 152 down to 20. Day 3 saw the early exits of players like Lee Markholt and Eoghan O’Dea, as well as Fabrice Soulier, Paul Volpe, and Ted Lawson before the final table was set.

With many in town for the weekend, this $1,500 NLHE did quite well:

Day 2 brought 268 players back to the tables and fairly quickly burst through the money bubble. Among those who cashed in the latter part of the day were Angela Prada-Moed, Andrea Dato, Phillip Hui, Roland Israelashvili, Brandon Cantu, Barny Boatman, and Eddy Sabat. The 18th place elimination of Joel Tushnet for $20,733 ended play for the night.

Of the 17 remaining players, names like Tim West and Marc-Etienne McLaughlin were among them. But the top five on the leaderboard were:

Another $1K NLHE tournament drew another big crowd as the end of the WSOP schedule came into view:

The noon tournament on Sunday started with big numbers but quickly thinned the field into the money, at which time players like Amit Makhija, Will Failla, Todd Brunson, and Tony Ma cashed out. The night ended with just 206 players remaining, and the unofficial chip counts showed these as the top five chip stacks:

One of the most exciting tournaments of the 2014 WSOP was the Big One for One Drop. With ESPN cameras ready for filming and players having offered up their $1 million buy-ins, the featured area of the main tournament room filled with some high rollers. Ultimately, these were the final tournament numbers:

Play got underway with just 37 players, but late registrations saw names like Rick Salomon and Erik Seidel join the fray. Before registration even closed, David Einhorn was eliminated from the tournament, as was Stanley Choi. Other exits later in the evening were Igor Kurganov and Vanessa Selbst, as well as Max Altergott, Brian Rast, Philipp Gruissem, Jason Mercier, Niklas Heinecker, Rono Lo, and Dan Smith.

Just 31 players remained at the end of the night, with some recognizable faces and the reigning champion in the top five alone. Those stacks were noted as follows:

Event 51 will play its final table.

Event 55 will play to and through its final table.

Events 56 and 57 will continue on their second days and try to set final tables.