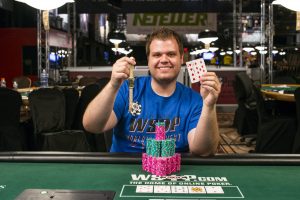 David Olson now knows what it feels like to hold a championship WSOP bracelet. (Image: WSOP)

David Miscikowski had to beat just one player to win his bracelet on Saturday, but Norbert Szecsi was a formidable opponent. David Olson had to defeat an entire table of championship-level players, and it was a battle all the way. But both Davids made it through those battles and emerged victorious.

Sunday offers another $1K NLHE, but the big attraction for the day will be a tournament with a slightly higher buy-in. The $1 million Big One for One Drop gets underway at 1pm today, with many seats already reserved and a few more to be taken before play begins. Between high-rolling businessmen and poker’s high-stakes elite, the field will be full of interesting faces – a poker fan’s dream. There will be quite a bit of coverage all day, but we will bring you the highlights when the chips have settled.

The fourth and unscheduled day of this event was the result of these original numbers:

Day 2 took the number of players down from 204 to 23, and Day 3 played on until heads-up action, which took several hours only to end with nearly even stacks.

David Miscikowski entered Day 4 with a slight lead, but the two battled for quite some time before Norbert Szecsi finally took second place and Miscikowski captured his first bracelet.

This historic deepstack tournament began on Thursday with these numbers:

Day 3 eliminated the vast majority of players, with names like Mustapha Kanit, John Monnette, Danny Wong, and Andreas Krause exiting late into the night. The payouts stopped at $21,758 with 62 players remaining, and the top five on the leaderboard were:

This limit championship tournament started with some modest numbers before wrapping up on Saturday:

Robert Como was the first to exit in tenth place for $23,268, which set the official final table. David Olson was in the lower half of the chip counts to start, but his comeback was made easier as big names like Gabriel Nassif, Bill Chen, and Greg Debora departed. Olson took the lead into heads-up play against Mikail Tulchinskiy, but the two traded the chip lead before Olson eventually took his to the winner’s circle.

The ladies-only championship event offered a 90 percent buy-in discount to ladies, which resulted in the registration numbers that took a big dive from the 954-player field the year before:

Day 2 brought 101 players back and didn’t take long to get the top 81 of them into the money for minimum payouts of $1,777. Some who cashed throughout the day and evening included Deanna Dozier, Cherish Andrews, Melanie Weisner, and Xuan Liu. The tenth place elimination of Karen Cameron for $9,078 ended play for the night with the final table set as follows:

This tournament was a popular one, finding increased participation over the previous year by a few dozen players:

There were just 152 players who started Day 2, but it took a while to get to the money portion of the festivities. When they did, payouts started at $5,007, and some who garnered at least that amount for their efforts included Tony Cousineau, Bart Hanson, Dylan Linde, Tom Koral, Brett Richey, and Andy Bloch. When play ended, there were still 20 players left in action with these as the top five stacks:

It was the weekend and time for another $1,500 NLHE. This one resulted in these impressive stats:

The first day of play reduced the field to just 268 players, meaning the money bubble was close but still intact. The results of an unofficial chip count showed these players in the top five:

Event 51 will play its fourth of five days and try to determine its final table players.

Event 55 will attempt to find its final table or get as close as possible.