It was Andrew Lichtenberger’s day on Sunday, and now he has more to celebrate on July 4th than just Independence Day.

Lichtenberger, a Las Vegan, has been playing WSOP events since 2009. His career includes more than $8 million live tournament winnings (about one-quarter of that from World Series of Poker events) and 34 cashes at the Series. Now he can add “bracelet winner” to his impressive resume as well. 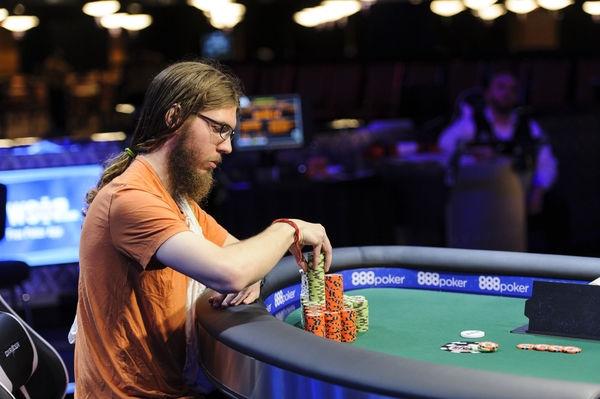 Lichtenberger limped on the button with 6♣5♦. His heads-up opponent Craig Blight of Australia then checked his option with 7♥4♣. The flop came 7♠4♥2♣. Blight opted to be sneaky by checking his two-pair, which induced Lucky Chewy to bet 300,000. And then a check-raise to 800,000 occurred. Lichtenberger called.

A lucky 3♥ hit on the turn. Blight checked again and Andrew made a 1,200,000 bet with the nut straight. In heads-up play, getting away from top two-pair is extremely difficult. Thus, the bet, to no one’s surprise, received a call. A meaningless K♠ came on the river.

Blight checked one more time and was then forced to decide if he wanted to call off the rest of his 5,250,000 chip stack. After tanking for a bit, he decided two-pair was too good to lay down. Game over.

Justin Bonomo already has one 2nd place and two 3rd place finishes this summer. But he’s still in search of his second career bracelet. His last one came in 2014 in a $1,500 No-Limit Hold’em tournament.

After Day Two of Event #55, the $50,000 Poker Players Championship, the pro who has almost $11 million in lifetime tournament cashes tops the leaderboard with 1,230,000 chips. Todd Brunson is in 2nd place with 1,050,000. These are the only two players who have surpassed 1 million chips.

Registration concluded on Sunday with 91 entrants. There are 42 players remaining and 14 will be paid. First place pays $1,296,097, although many of these players will owe backers a portion of their winnings. Bonomo, for example, sold off 45 percent of his $50,000 buy-in.

Phil Hellmuth is trying to finish off the 2016 WSOP strong after a rocky month of June. But he’ll need to run it up quickly if he expects to contend for the bracelet in this event. The Poker Brat ended Day Two with just 230,000 chips, putting him in 37th place for the start of Monday’s play at 2 pm PT today.

Howard Lederer made it through two days of play and has an average stack (550,000). Not many poker fans at the Rio are rooting for him, though.

The Mizrachi brothers each began Day Two in the top seven in chips. After Sunday’s action, Robert and Michael are 4th and 6th in chips, respectively. Michael needs to win another bracelet to tie Robert for the family lead (four).

Event #54, the $888 Crazy Eights No-Limit Hold’em is one of the wackiest events of the summer. After just two days of play, the tournament has gone at lightning speed from 6,761 to 12. That’s pretty much insane.

A fast blind structure has led to a quicker-than-expected event wrap up. Play will likely end on Monday at the conclusion of Day Three. The tournament was originally scheduled for five days of play.

Players have been dropping like flies. But with an $888,000 first-place guaranteed payday within reach of these final 12 players, expect a tad more sanity on the final day.

Chase Johnson from Las Vegas holds the chip lead. Loni Harwood is the lone remaining former bracelet winner. She is 9th in chips and could become the third female to win a bracelet in just over a week.

The last man standing from our CardsChat team, Joe Mussat, busted out in 57th place. He took home $8,193. Well-played, Joe.

Independence Day is a big day at the Rio. We are just five days away from the Main Event, and should be down to the final few tables in the Poker Players Championship by the time fireworks festivities take place tonight on the Strip.

Event #58, the $1,000 No-Limit Hold’em, is the only new tournament set to get underway on Monday. This will be a turbo tournament with 30-minute blind levels.

Go team cardschat! Let’s all do better this year