Scott Seiver, the fifth-ranked all time tournament casher in America with over $21 million to his credit, appears to be doing it again. Seiver ended Day One of Event #55, the $50,000 Poker Players Championship, as the chip leader, with 593,000 in his stacks. 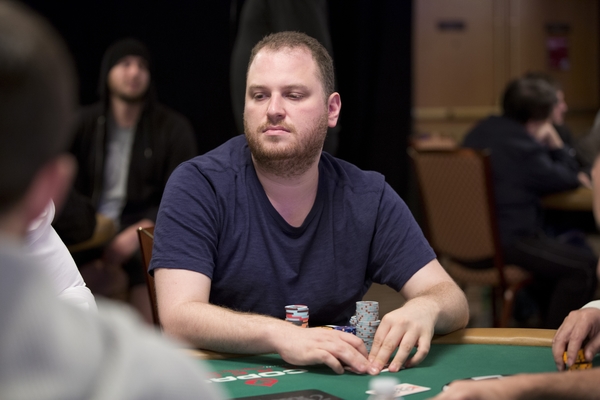 Scott Seiver will begin Day Two of Event #55, the $50K Poker Players Championship, as chip leader against a talented field of 84 remaining.

Seiver, who was the runner-up in the 2015 Super High Roller Bowl, a 2008 bracelet winner, and has already cashed for more than $47,000 in two events so far this season, has what it takes to take down a very tough field of mostly poker pros in this signature event.

That wasn’t the only big news on Saturday, however. Another pro, Brandon Shack-Harris, was the biggest winner, Howard Lederer and Chris Ferguson both made appearances, and Andrew “Lucky Chewy” Lichtenberger and Gavin Smith could each be a day away from a bracelet.

But back to Event #55 for now. The 87 entrants all started with 250,000 chips. This is one of the most anticipated tournaments of the year, and many poker pros will tell you it’s their favorite.

Timofey Kuznetsov, arguably the top Russian player in the world, will start play today 2nd in chips (557,600) when play resumes at 2 pm Pacific time. And the Mizrachi family is off to a great start. Brothers Robert and Michael have both cracked the top seven after Day One, which should make for some interesting sibling rivalry all on its own.

Jason Mercier did what he’s almost always does on Day One:  build a chip stack and survive. He ended Day One with 384,800 chips. 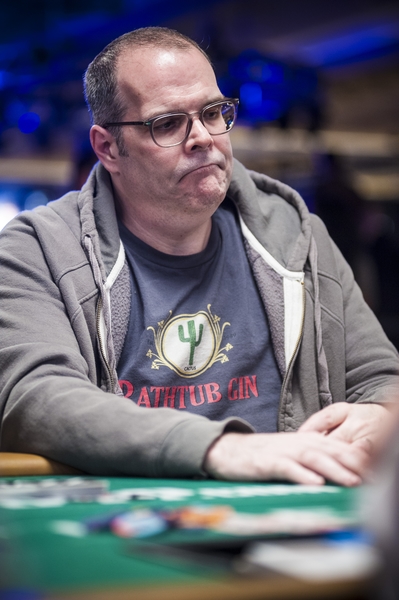 Howard Lederer, aka “The Professor,” ponders a poker move in Event #55, the PPC, on Saturday. (Image: pokerphotoarchive.com)

The disgraced Howard Lederer also made an appearance and bagged 316,200 chips, putting him in the 25th spot.

He didn’t say much, and nor did his co-Full Tilt Poker scandal partner Chris “Jesus” Ferguson, who was busy on the other side of the Amazon Room at the Rio stacking chips in Event #54, the $888 Crazy Eights No-Limit Hold’em.

Ferguson refuses to speak to reporters and rarely says a peep while playing. Lederer, on the other hand, will occasionally chat with others at the table. But he still refuses to address the media.

Jesus attracts more negative comments from poker fans inside the Rio because, unlike The Professor, he still hasn’t issued an apology.

His last bracelet came in 2014 in a $1,000 Pot-Limit Omaha tournament. The Chicago resident has been a consistent performer at the World Series of Poker the past few years.

Loren Klein was chasing his second bracelet of the summer. But he had to settle for 2nd place and his fifth cash of the series. Tommy Le (3rd), Melad Marji (4th), Matthew Parry (5th), Harley Stoffmaker (6th), Junayed Khan (7th), and Dominique Mosley (8th) rounded out the final table.

“Lucky Chewy” Hoping to Get Lucky

Andrew “Lucky Chewy” Lichtenberger has been considered a top player for quite some time. But he hasn’t been able to get over the hump to win a WSOP bracelet.

That all could change on Sunday. Lichtenberger has more than a 3-1 chip advantage over Craig Blight in Event #52, the $3,000 No-Limit Hold’em, after Day Three. The two are the only remaining players.

First place will pay $569,158 and the runner-up will receive $351,721. Blight is also seeking his first career bracelet. This is just the second cash of his WSOP career. His last one came in 2013 for $3,461 after finishing 52nd in a $1,000 No-Limit Hold’em tournament. Lichtenberger already has over $2.3 million in lifetime earnings at the WSOP.

Plenty of Crazy in 888 Event

Chris Ferguson’s appearance in the Crazy Eights (Event #54) wasn’t the only thing keeping us entertained here at CardsChat. We had 18 fine folks representing our brand on Day One. Unfortunately, only one of them has survived to come back on Sunday.

Ryan Laplante, a 2016 bracelet winner, busted all four Day One flights without cashing. That’s rare for him this summer. Chad Holloway, a CardsChat contributor, entered the final Day One flight and, despite hitting a straight flush early on, was unable to cash.

Debi O’Neill, our CC forum admin, busted out in 65th place of Flight C and took home a nice paycheck of $2,583. Good game, Debi. But our top performer is Joseph Mussat, aka JoeShowDown. Not only did he get through Day One, he bagged a massive stack (362,000) and returns on Sunday in the 6th spot out of 62 remaining of the 2,230 starting field. We’ll be following his progress over, we hope, the next few days.

The Crazy Eights winner is expected to be determined on Tuesday, July 5.

Event #53, the $1,500 Mixed PLO/8; Omaha 8/8; Big O is down to six players heading into Day Four. Gavin Smith is the chip leader and hopes for a second career bracelet.

scott Seiver is a great player circuit high rollers is always put in the top 10 of all those tournaments, always a few players are registered but they are players of the highest elite of world poker so it is not easy to face those players always stands give that group of great players