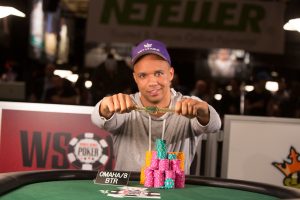 It was an exciting day at the WSOP, as events like the Monster Stack and Ladies Championship were in action.

Quite a few eyes were on Event 50, however. It was an eight-game mix with names like Daniel Negreanu and Phil Ivey in contention. As it played on with a sizeable rail in person and many people logging on to check updates, Ivey simply soared as the final table’s chip leader. He overcame obstacles along the way, but ended up capturing his 10th World Series of Poker gold bracelet.

Ivey is now tied with Doyle Brunson and Johnny Chan, each of whom have 10 bracelets, and they all trail only Phil Hellmuth, who has 13 WSOP wins.

Play will continue through the weekend with more undoubtedly exciting results.

What started as a three-day tournament at the WSOP turned into four but started with these figures:

That third day started with Margareta Morris in the chip lead and Andy Spears as the first player to exit, taking home $22,309 for the 23rd place finish. Others to leave included Melanie Weisner, Tony Gargano, Jason Koon and Josh Arieh. Timur Margolin departed in tenth place for $43,081 on the final table bubble.

Play moved forward with Blake Bohn out in ninth and John Dolan in eighth, and Kevin MacPhee later in sixth. Morris finished her run in fourth place, and the third place elimination of Manig Loeser for $288,912 left Norbert Szecsi in the chip lead with 7.34 million for heads-up play against the 3.1 million of David Miscikowski.

After quite a battle, the two continued until play stopped, and they will resume two-handed action on Saturday with these chip counts:

The low buy-in mixed game started on Wednesday with these numbers:

Day 2 thinned the field from 106 players to just 14. Day 3 brought them back and eliminated Christian Pereira in 13th place for $7,092, followed by Yehuda Buchalter for the same amount. Amnon Filippi then busted, as did Abdel Hamid and Daniel Negreanu, each of them taking home $9,014.

The final table then began with Phil Ivey holding a massive chip lead. After Dan Heimiller busted in third place, Bruce Yamron had a slight chip advantage over Ivey, but proceeded to lose quite a few hands. Finally, in the Omaha-8 round, Yamron lost the remainder of his chips to Ivey, and the latter captured his 10th bracelet.

After the initial day of confusion and record-setting action, the final numbers were as follows:

Day 2 brought back a still-substantial number of 3,826 players, but hit the money late in the day so the top 792 players could begin payouts. Among the last to hit the cashier cage for the night were Amir Lehavot and Dan Goldman. Ultimately, there were 576 survivors who bagged chips, and these were the top five on the leaderboard:

The latest in the series of $10K buy-in championship events started with these humble figures:

Day 2 returned with 72 competitors, but it wasn’t until very late in the evening that the money bubble burst when Yakov Hirsch exited in 19th place. Kyle Ray was the first to cash for $16,273, and others who followed were David Chiu, original Day 2 chip leader Kenny Shei, Cathleen Tran, Matt Szymaszek, Matthew Gallin, and Steve Wolansky. The last bustout of the night was Jeff Thompson, who took home $23,268 for the 11th place finish.

Ten still remained when play stopped, just one from the official final table. The complete set of chip counts was:

It is called a championship event, but the buy-in of $10K is only for men who attempt to enter the tournament. Women are granted a 90% discount so they can play at the $1K buy-in they’ve always had. The numbers were down quite significantly this year, partially due to so many women deciding to play the previous day’s Monster Stack tournament. The final tally for this event was:

The vast majority of players exited throughout the first day of action, leaving just 101 by the end of the night. Of those survivors, Daniel Negreanu’s assistant led the pack, and the complete top five were listed as follows:

The late-starting tournament on Friday was another PLO-8 event, this one with a $3K buy-in and these starting numbers, which showed an increase from the previous year:

The field thinned to just 152 players by the end of the late night, and two 2014 WSOP bracelet winners were in the top five. Those top chip counts were:

Event 49 will resume its heads-up match and play to declare one a winner.

Event 51 will play its third of five days.

Event 52 will play its final table.

Events 53 and 54 will move toward their final tables.

Ivey is one of my favorites.