Safiya Umerova made a good week for the ladies at WSOP 2016 even better on Friday. After Kristen Bicknell became the first woman to win a gold bracelet at this year’s Series, Umerova came out victorious just a day later. For extra bragging rights, she can now say she beat out arguably the best woman in the game today, Vanessa Selbst, to boot. 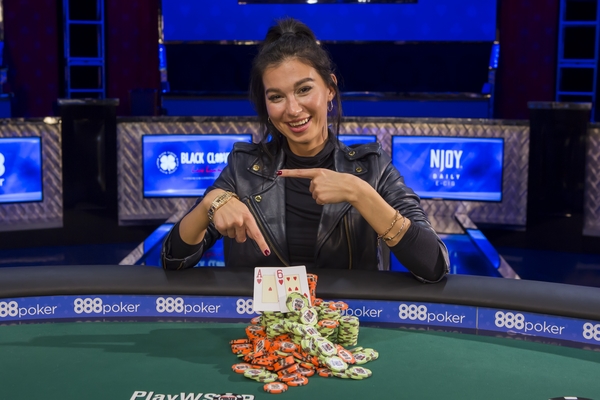 Safiya Umerova shows off her new bling after beating out 1,050 players on Friday in Event #50, the $1,500 Shootout No-Limit Hold’em. (Image: pokerphotoarchive.com)

Umerova beat out 1,050 players in Event #50, the $1,500 Shootout No-Limit Hold’em, to garner the first bracelet of her career. The  28-year-old Russian-born recreational poker player from Los Angeles earned $264,046, the largest score of her poker career to date.

But it’s not her first big win. That came just two months ago in a $570 buy-in event in April at the Seminole Hard Rock in Hollywood, Florida. She took home $76,144 for that victory.

Umerova has gone from being a recreational player in popular California casinos such as the Hustler to focusing on being a tournament regular. After her recent performances, which also includes a cash in Event #46 at the WSOP this summer, she appears to be ready to advance her professional goals to the next level.

Until Bicknell won Event #46, the $1,500 Bounty No-Limit Hold’em, no women had even cracked the top three in a WSOP event in 2016. And just like that, we now have two ladies wearing gold bracelets.

This is good news for those who think poker has a gender gap problem. One of the best marketing tools to attract women is other women winning major events. As mentioned earlier, Vanessa Selbst finished 10th in the $1,500 Shootout.

Umerova attributed her victory to preparation.

“I studied the game almost every day.  I read a lot of books.  I had people help me.  I worked very much on my game to get here,” she said moments after winning the bracelet.  “I wouldn’t be here if I didn’t work hard on my game.”

On the final hand, she had her heads-up opponent Niall “Firaldo” Farrell of Scotland, drawing dead on the turn. Umerova made a standard button raise to 200,000 with A♥6♥. Farrell decided to shove for 1,740,000 with Q♠9♥. The flop of A♦K♥5♣ left Farrell’s chance of winning to a runner runner straight or runner runner two pair. The 5♥ on the turn left him drawing dead, and the 2♥ on the river gave Safyia an unnecessary nut flush.

PLO Title Still a Day Away

Three days of play wasn’t enough to determine a victor in Event #51, the $10,000 8-Handed Pot-Limit Omaha. By the end of the day on Friday, six bracelet hopefuls remained. They are:

A bracelet in this event is worth a hefty $894,300. There were 400 players registered on Day One. We’ll have this thing settled by sometime on Saturday.

Two additional Day One flights will take place on Saturday.  Halfway to the end of Day One, there are already 1,525 players registered. One of those players is our own Ryan Laplante. The 2016 bracelet winner entered both flights on Friday. And, unfortunately, busted twice. He’ll be back to fire two more bullets on Saturday.

Nancy Birnbaum, another CardsChat team member, got off to a great start, but then ran into an unfortunate set-under-set hand and busted. We’re hoping for some better luck for our crew on Saturday.

There are still 31 players left in Event #52, the $3,000 No-Limit Hold’em, after two days. A bracelet could be awarded on Saturday, depending on how fast players bust. Tony Ruberto is the chip leader. And once again, 73-year old Pierre Neuville, who is having an amazing WSOP run, is in contention (8th in chips). Andrew Lichtenberger, John Hennigan, and John Racener also still have chips.

Allen Le leads the way heading into the final day of Event #53, the $1,500 Mixed PLO/8; Omaha 8/8; Big O. John Monnette has been doing deep runs in numerous events this summer. He’s 2nd in chips when cards get in the air on Saturday.

One of the biggest tournaments of the summer kicks off today in Event #55, the $50,000 Poker Players Championship. This high-roller tournament will attract many of the best players in the world. We’ll keep you updated on its progress over the next five days.

safiya umerova congratulations for this great win your first bracelet ganadole over 1000 players incredible, and venias good run in from Los Angeles, does not look like a recreational and professional player for me are