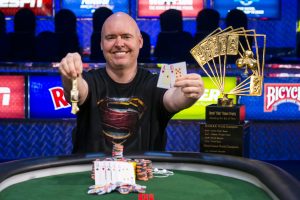 The most-watched tournament of this Friday edition of the 2014 World Series of Poker was the Monster Stack event, a $1,500 NLHE tournament with deep stacks of chips that brought more players to the table than anyone expected. The WSOP staff had to act on the numbers as they came in and eventually had the final players seated by midnight. It was a crazy day, but no one was turned away.

Needless to say, there may be more Monster Stack events on the schedule in 2015.

Meanwhile, the coveted Poker Players Championship Chip Reese trophy was on the line, along with the first prize of more than $1.5 million. The final table was filled with worthy contenders, and none other than John Hennigan, known to many as “Johnny World,” shone through, taking home his third bracelet and the trophy honoring his one-time friend Chip Reese.

Stay tuned for the weekend action as we update it here daily.

The Poker Players Championship was one to watch. Despite the low turnout as compared to previous years, the field was stacked with big names and started with these numbers:

Day 4 took 22 remaining players and took the top 14 of them into the money. Play stopped with just eight players still seated and Brandon Shack-Harris in the chip lead.

Day 5 started with the eighth place elimination of Allen Kessler for $134,101, and Melissa Burr followed in seventh place. Frank Kassela was the sixth place finisher, and Chun Lei Zhou and Abe Mosseri exited next in that order. When the final three took a dinner break, Shack-Harris was leading, Jesse Martin was in second, and John Hennigan was in a close third.

Shack-Harris lost ground but did eliminate Martin in second. John Hennigan took the chip lead into heads-up play against Shack-Harris, though, and captured the win in little more than an hour. This was Hennigan’s third WSOP bracelet.

The Tuesday tournament saw an upswing in interest from the previous year and began with these figures:

Day 2 thinned the field from 152 players, into the money, and down to just 11 players with Scott Clements in the lead.

Day 3 saw Brian Brubaker exit in 11th and Philip Sternheimer in tenth, each missing the final table but taking home $15,278 for their efforts. Recognizable faces like Tom Schneider and Jeff Madsen departed in sixth and fourth places, respectively, and Tyler Patterson took a bit of a lead into heads-up play against Scott Clements. But the play was tense and went on for nearly two hours before Patterson won his first bracelet and denied Clements his third.

With nearly 100 players less than the previous year, this event still had a fairly strong showing and substantial prize pool:

Day 2 brought 204 players back to the tables, and it took until the mid-evening hours to burst the money bubble, which happened courtesy of Dan O’Brien, who exited in 73rd place. Pierre Neuville was the first to head to the cashier cage for his $9,224, and others who followed included Taylor Paur, Eric Froehlich, Ami Barer, Ken Einiger, Lauren Kling, and Hasan Habib. Randal Flowers exited in 24th place for $22,309, and play stopped with 23 players remaining and these five in the lead:

The low buy-in mixed game event was popular and did well as a new offering on this year’s schedule:

Day 2 started with 106 remaining players, and the money bubble finally burst in the evening hours to allow payouts to begin at $3,063. Max Pescatori, Gabriel Nassif, and Greg Raymer were among the first to cash, and names like Brandon Cantu, Martin Staszko, and David Baker followed later in the evening. Of the 14 who survived, these were the top five on the leaderboard:

This was quite the exciting tournament. Earlier in the week, registration was happening at such a pace that the WSOP staff declared that there would be two starting flights for the event. Even with that change, Thursday saw such big numbers that the latter flight had to be seated in waves, with the last of the players taking their seats past 10:30 at night. Eventually, late in the night, the confusion died down and the final numbers for this deep-stack event were set:

When the madness ended late into the night, only 3,826 players made it through with chips. Those with the top five chip stacks were listed as:

This championship event began at 4pm in the afternoon and drew a fair number of players for the big buy-in event:

More than half of the players survived the late-night limit action, resulting in 72 of them bagging chips when the clock stopped. Official chip counts were not available, but the top five that were given were:

Events 49 and 50 will play until winners are determined.

Event 51 will attempt to thin the field down to a more manageable number.

Event 52 will play toward a final table.