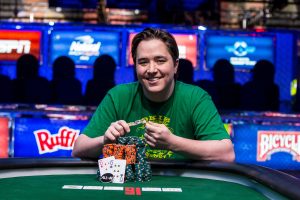 Two players won their tournaments at the 2014 World Series of Poker yesterday. Jordan Morgan and Will Givens are each known for their hard work in the game of poker, and both were inundated with congratulations for their victories and first WSOP gold bracelets.

Meanwhile, the $50K Poker Players Championship (PPC) will bring back just 22 players today and likely reach the money sometime in the afternoon to pay the top 14 players. Melissa Burr remains as the only woman in the field and could be the first to ever cash in a PPC at the WSOP. Big names are still in contention, a great time for poker fans to sidle up to the ropes at the Rio and get some photos of some big poker stars.

Keep your eyes on the action today, or just check with us tomorrow for a rundown of everything that happened.

A simple $1,500 NLHE was anything but simple and ran for four days. It started with these numbers:

Day 2 thinned the field from 212 to 15 players, and Day 3 worked its way to the final table. But when heads-up play started between Evan McNiff and Jordan Morgan, the two couldn’t have predicted a 200-hand battle to end in nearly even stacks.

They returned for an unscheduled Day 4 and played more than 50 hands before Morgan captured the well-earned victory.

This particular $1K NLHE tournament began with these stats:

Day 2 took the 144 remaining players and whittled the number down to just 11.

Day 3 started with Terik Brown and Kim Ng exiting before the final table, each taking home $17,530 for their deep runs. Givens built a stack and took the lead into heads-up play against former chip leader Angela Prada-Moed. The latter doubled several times over the course of the battle but never gained enough ground to stop Givens from getting the gold.

When the big buy-in eight-game tournament, better known as the Poker Players Championship, began, the registration numbers showed this:

Day 2 officially set the field and sent quite a few players home, ending the night with 55.

Day 3 eliminated players like David Bach, Alex Bilokur, Josh Arieh, and Eli Elezra. Some of the last bustouts of the night included John Monnette, Chris Klodnicki, Andy Bloch, and Calvin Anderson. Only 22 survivors were listed on the leaderboard, with these players in the top five:

When players gathered on Monday for the Ante Only event, they set these tournament numbers:

Day 2 brought 80 players back and quickly burst the money bubble to ensure payouts of at least $2,718 for the top 72 finishers. Some who cashed in were Dutch Boyd, Amanda Baker, Erik Seidel, George Danzer, Nenad Medic, Dan Kelly, Daniel Negreanu, and Maria Ho.

Just before midnight, the 10th place elimination of Brendan Taylor for $12,694 set the official final table, and play stopped with these chip counts:

The single starting tournament on Tuesday brought a solid field to the tables, quite a few more players than last year. The final registration numbers were:

Day 1 took the field down to just 152 players, quite a few off the money. And the top five players on the leaderboard were listed as follows:

Event 46 will continue with its fourth of five days and attempt to set the final table.

Event 47 will play out its final table.

Event 48 will continue in an effort to set the final table.