Poker is one of those games that has heroes and anti-heroes. And WSOP 2016 is sort of the Comic Con of poker, with larger-than-life characters showing up and being cheered and booed based on their reputations and images. 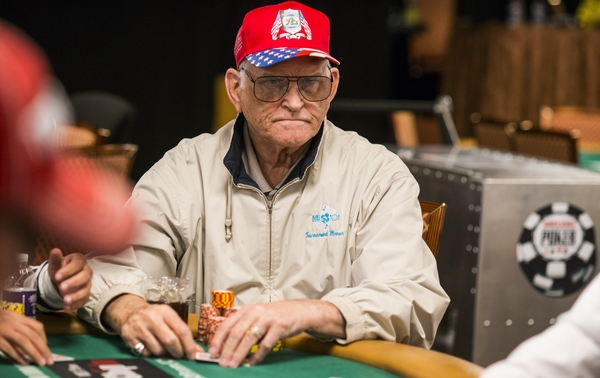 So in a year when personas non grata Chris “Jesus” Ferguson and Howard Lederer returned to the World Series, senior superhero T.J. Cloutier has been a welcome reminder of a time when the game had more positive role models. The poker legend had quite a sizeable rail throughout his Monster Stack play (Event #41) and unlike Jesus, people were there to cheer him on, not to boo him.

Cloutier, now 76, finished 14th out of 6,927 in the $1,500 Monster Stack No-Limit Hold’em. He endured nearly four grueling days before hitting the rail on Tuesday. Cody Pack, the eventual 9th place finisher, busted him on a pretty sick hand.

Cloutier raised to 500,000 with Q♣9♣ on the button and was called by Pack in the small blind with Q♠J♦. The flop ran out Q♥J♣6♣, giving Cloutier top pair with a flush draw, and Pack top pair with a better kicker. All the money went in on the flop, as could be expected.

Slightly worse than a 2:1 underdog, Cloutier needed some luck, but none came when the turn and river ran out 5♦K♦. Game over for the six-time World Series of Poker bracelet winner. 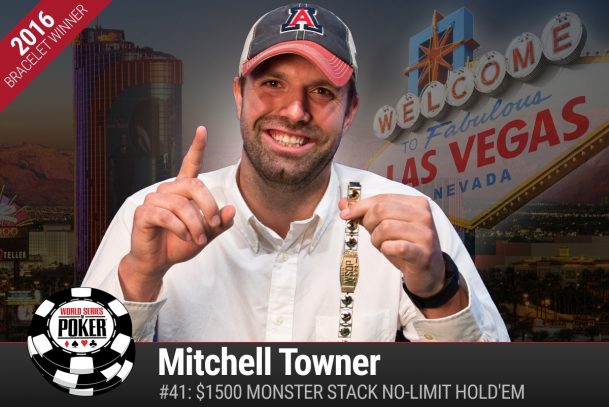 Finance professor Mitchell Towner of Austin, Texas has put some money where his mouth is by winning his first WSOP bracelet and over a million bucks in the Monster Stack event. (Image: WSOP.com)

Play was actually expected to conclude on Wednesday, but Tuesday’s action was so intense that we already have a winner.

His name is Mitchell Towner from Austin, Texas. His first career WSOP cash and bracelet was good for a pretty sweet $1,120,196. Not a bad start to his World Series of Poker career. Not bad at all.

The final table of nine players lasted just 123 hands. In some WSOP events, heads-up play lasts longer. In this case, the heads-up match between Towner and Dorian Rios concluded in just 17 hands. David “The Dragon” Pham, another poker legend, was the biggest name at the final table. He busted out in 5th place for $289, 497.

Jason Mercier is still after his third bracelet of the summer, and will have a chance to do so on Wednesday. The Floridian pro nailed his 9th 2016 cash in Event #48, the $5,000 No-Limit Hold’em (30 Minute Levels) on Tuesday.

Mercier will now head into the second and final day of the event with 311,000 chips, which is good for starting in the 15th spot out of the 49 remaining players. Former Main Event champ Joe Cada just squeaked into today’s play in the last spot with a paltry 22,000 chips to his name.

Latvia’s Eduards Kudrjavcevs leads the way with 640,000 chips. Michael “The Grinder” Mizrachi will attempt to be the second bracelet winner of the summer from his family, and kicks off on Wednesday with 608,000 chips. His brother Robert won his fourth career bracelet in Event #3, the $10,000 Seven Card Stud.

Also returning to play today at noon Pacific time will be Dietrich Fast, Chance Kornuth, Mike McDonald, John Racener, Asher Conniff, and Phil Hellmuth. For the Poker Brat, it’s only his third cash of what has been a disappointing summer for the 14-time Series bracelet winner. He has just 122,000 chips, which puts him near the bottom in the 40th spot.

Loren Klein, a 34-year old poker pro from northern Nevada, won his first career bracelet in Event #45, $1,500 Mixed No-Limit/Pot-Limit Omaha, on Tuesday. After three tough days, Klein was able to finally get over the hump and win a title after 22 previous cashes at the summer series.

Event #44, the $1,000 No-Limit Hold’em, was intended to be a three-day event, but we’ll have a fourth day on Wednesday. Wenlong Jin and Steven Wolansky are heads-up with almost identical chip stacks with a noon restart time.