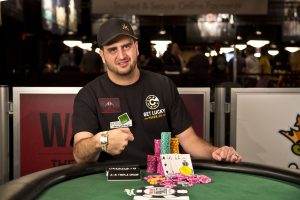 Saturday was a good day to be at the 2014 World Series of Poker as a fan. Spectators were able to see Italy take its seventh WSOP win in the Series’ history, when Davide Suriano beat Sam Stein in the $10K Heads-Up Championship. Robert Mizrachi, with both brothers nearby, captured his second bracelet in the very exciting first Dealer’s Choice tournament. And Sean Dempsey took down his first gold bracelet.

Fans will be on the rail today, not as much for the $1K NLHE that starts at noon, but for the $50K buy-in Poker Players Championship tournament that begins at 4pm. The big buy-in and eight-game layout ensures a field of the game’s top players and will be a feast for poker fans who want to catch a glimpse of participants like Ivey, Negreanu, and Hansen. The tournament will run for five days, so keep your eyes here for updates as it moves along.

What turned into a four-day tournament started with these numbers:

Day 2 thinned the field from 206 players to 26, and Day 3 was scheduled to find a winner. But play went on much longer than anticipated and brought three players back for a fourth day. Jacob Schindler was the chip leader but lost chips when Sean Dempsey doubled through him. Schindler ended his run in third place, and Dempsey was at more than a 2-to-1 deficit going into heads-up against Ryan Jaconetti.

The Heads-Up championship tournament drew a small but solid field:

By the time Day 3 started, only two players remained: Sam Stein and Davide Suriano. The latter jumped out to an initial lead that he maintained and increased over the course of 36 hands. Stein finally pushed his K-7 against the A-T of the Italian and lost, giving Suriano his first bracelet and the seventh ever for an Italian.

The Dealer’s Choice became one of the players’ favorites at the 2014 WSOP, and it all started with these stats:

Day 2 took the field from 95 players down to 10, and Day 3 saw early exits from the two women remaining, as Jen Harman took home $9,944 for tenth place, and Melissa Burr did the same for ninth. Robert Mizrachi eliminated Marco Johnson later in seventh place for $13,411 to set the official final table of six.

Aaron Schaff was the original chip leader with six remaining, but Mizrachi was strong. As players like Frank Kassela and Bill Chen departed, Schaff remained dominant, however, and took 1.185 million chips into heads-up play against the 700K of Mizrachi. The latter took over during Omaha, though, and captured his second WSOP bracelet.

This tournament was popular enough to draw 52 more players than the previous year and start off with these numbers:

Day 2 started with 96 survivors and hit the money midway through the day. Players like Brian Rast and original chip leader Davidi Kitai exited, as did Mohsin Charania, Jonathan Little, Scotty Nguyen, JC Tran, and Phil Galfond. Play stopped with just 13 remaining and these five at the top of the leaderboard:

The turnout for the Limit Hold’em festivities was solid with these final numbers:

Day 2 brought 118 players back to the tables and eventually pushed through the money bubble. As the field wore down, players like James Obst, Allyn Jaffrey Shulman, Jeff Shulman, and Steve Wolansky departed. The final table was then set for Day 3 as follows:

The only starting tournament for Saturday was another $1,500 NLHE event, which ended up with a rather large field:

The first day of play was a whirlwind that left only 212 players seated, just a few spots outside of the money. With a long way still to go, these were the top five players after chips were counted:

Events 42 and 43 will play until they each have a winner.

Event 44 will try to play down to its final table.

Event 45 ($1K NLHE) will start at noon, and the highly anticipated Event 46 ($50K Poker Players Championship) will starts its five-day action at 4pm.