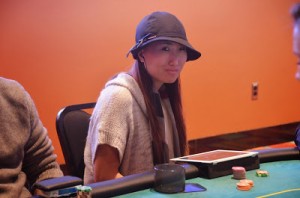 The 2014 World Series of Poker is slowing down before things pick up again later next week. But Saturday will offer lots of railbird action for poker fans, as three events aim to finish and declare bracelet winners.

The $3K NLHE tournament was supposed to finish last night but ran long, bringing three players back for an unscheduled Day 4. The last of the $10K NLHE Heads-Up matches will run today, as will the Dealer’s Choice event. The latter is down to just 10 players, though only six make the official final table. Melissa Burr is there but short, and will attempt to reach her third final table of the summer.

What was scheduled as a three-day tournament started on Wednesday with these numbers:

Day 2 took that starting number down from 205 players to 26, and Day 3 did take it down to the final table. Players like Erik Cajelais, Bart Hanson, Bernard Lee, Matt Affleck, and Anthony Spinella exited before that point, however, Clyde Walters then bubbled the final table and took home $30,927 for tenth place.

Ryan Laplante had the chip lead as the final nine began. Players like Layne Flack and Nam Le busted fairly early, and Laplante then departed in fifth place. Not long after Ryan Olisar took fourth place for $154,148, play stopped with these three remaining:

This championship tournament saw significantly fewer entries than last year, down from 162 entries in 2013:

By Day 2, only 16 players were left. The first round of that day saw bustouts from Jason Koon, Erik Seidel, Alberto Gomez, Taylor Paur, Max Silver, John Smith, Sergan Kurnaz, and Daniel Negreanu, each of whom took home $26,584 for their efforts.

The next round eliminated Dee Tiller, Tommy Chen, Ankush Mandavia, and Scott Baumstein for $54,736 each.

The last round of the night saw Sam Stein eliminate Scott Davies for $111,942. Shortly after, Davide Suriano sent Daniel Colman out in third place with $111,942 as well. Those winners will face off on the final day for the bracelet:

With a low buy-in and 16 game options, the new Dealer’s Choice was a big hit with those who played:

Day 2 brought 95 players back and thinned the field into the money. Jimmy Fricke was the first to cash for $2,799, and others who followed included Brian Rast, Jesse Martin, Calvin Anderson, Todd Brunson, Gabriel Nassif, and Gavin Smith.

Later in the evening, Maria Ho exited in 15th place, Brandon Cantu in 12th, and Maria Mayrinck in 11th place for $7,568. Play stopped with 10 competitors vying for the title:

The flurry of PLO action on Day 1 reduced the field to 96 players, and 2014 WSOP bracelet winner Davidi Kitai led the pack. The top five chip counts were:

The selection of Limit Hold’em in 2014 was slim, so this tournament did fairly well with these results:

The limit action didn’t start until 4pm and then played well past midnight to thin the field down to 118 players, not very close to the money yet. That bubble will burst on Day 2. Meanwhile, these players sat on the most chips of anyone in the crowd:

Event 39 will complete its final table.

Events 40 and 41 will play their third and final days.

Events 42 and 43 will attempt to reach their final tables.