Chris Ferguson, a tad less adored than his nickname namesake Jesus, received most of the attention at the Rio in Las Vegas on WSOP Day 25. 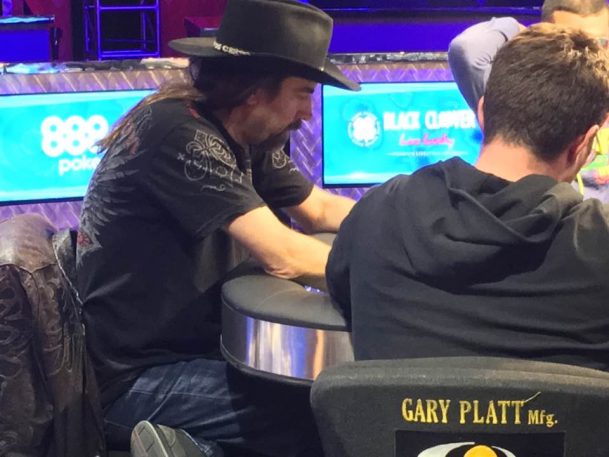 Chris “Jesus” Ferguson has been none too chatty and none too popular at his inaugural return to the World Series of Poker this year. But he still has poker skills, there’s no denying that. (Image: CardsChat.com exclusive)

To recap a bit, this is the first year that Jesus has competed in the World Series since 2010. As you probably know, he had previously been keeping a rather low profile since Black Friday in 2011 for his role in the Full Tilt Poker scandal.

But now he’s back, and much to the chagrin of many, no doubt, doing quite well this summer.

His cash on Saturday was his sixth of the series and the 69th of his illustrious career. He came very close to picking up his sixth WSOP gold bracelet last night, but went card dead for most of the final table and made a questionable call against the eventual champion, Martin Kozlov.

Kitai, after all, had raised pre-flop and from the big blind, no less. But then again, he could have been trying to get Jesus to lay down his hand with something like 5-6 suited, flopped the open-ended straight draw, and then made runner-runner trips on the turn and river. What to do, what to do.

Ferguson made the call only to discover his opponent was holding A♣7♠ for the flopped top two pair. Losing that hand crippled Jesus and he was unable to recover, which made many fans in attendance happy. In fact, whenever Ferguson lost big hands throughout the match, the crowd cheered.

When he finally busted out, he received a heavy dose of boos, including from one seemingly intoxicated fan who shouted obscenities Jesus’ way. Some poker fans may never let go of their anger towards him, as well as fellow Full Tilt exec Howard Lederer, who’s also made a showing at this year’s Series.

But like it or not, Jesus is back and he isn’t going anywhere. Despite being away from the game for five years, he’s shown he can still play at a high level.

Christopher Vitch, a 33-year old poker player and coach, can now claim to be a WSOP bracelet winner as a recruiting tool for new students. He took down Event #40, the $2,500 Mixed Triple Draw Lowball (Limit) on Saturday for $136,854. There were 236 players in the tournament. 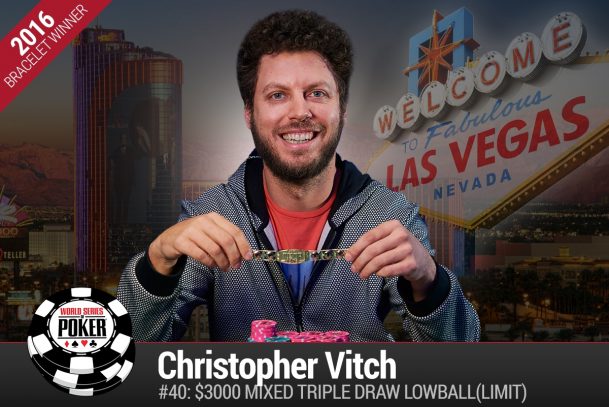 Siegfried Stockinger finished in 2nd place and David Gee was 3rd. One of the best players in the world, Dzmitry Urbanovich, busted out in 12th.

Event #41, the $1,500 Monster Stack No-Limit Hold’em championship, drew an impressive 6,927 entrants. After two Day One starting flights, there are 2,001 players remaining to return to play on Sunday. Steven Harper from Portland, Oregon is the overall chip leader with three days left to go. Cards get in the air at 11 am Pacific time today.

The Colossus and Millionaire Maker are the only events to draw larger fields thus far. The Rio was jam- packed on Saturday due to the Monster Stack and Event #42, the much-smaller $3,000 Shootout No-Limit Hold’em (which only drew 400 entrants) running at the same time.

Some monster players are still in the running in Event #41. Returning Sunday will be Dutch Boyd, Brian Hastings, Tony Dunst, Joe McKeehen, Michael Mizrachi, Erik Seidel, and TJ Cloutier, all with plenty of playing fire power in their chipstacks.

Event #42, the $3,000 Shootout, had dwindled down to just 10 players from its original 400 after Saturday’s action. Maria Ho will attempt to become the first female bracelet winner of 2016. She starts Sunday play as 4th in chips with 597,000 in her stacks. But all 10 final tablers are so close in chip counts, ranging from a high of 598,000 for Californian Faraz Jaka to a low of 596,000 for the UK’s Philip McAllister that this could really be anybody’s game today.

Jaka’s nickname is the “Homeless Millionaire.” Although he’s made millions playing poker, he remains, essentially, homeless. He travels the world from city to city, experiencing different cultures instead of settling down in one place.

We’re at right about the halfway point of the series, and from what we’ve seen so far, it may go down as one of the most interesting of all time.