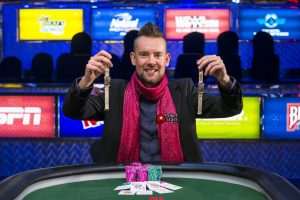 George Danzer made history at the 2014 WSOP by becoming the first player this year to win two gold bracelets. He captured both of them in championship events with $10K buy-ins, and the German took his second one in Event 38, in which he went wire-to-wire as the chip leader throughout the tournament. It was quite a feat for the Mohawk-haired player and member of Team PokerStars.

And then there was the Dealer’s Choice tournament. What was expected to be somewhat chaotic went off fairly smoothly, becoming an enjoyable day for most players. That was until the mid-evening hours when Brandon Cantu became upset at his table. By most accounts, Cantu accused someone of angle shooting, that person accused Cantu right back, and Jesse Martin stepped in to stand up for the other person. Cantu then got into Martin’s face and tried to punch him. Security guards stepped in to calm Cantu and then issue a penalty of several rounds.

Earlier in the Series, Cantu was escorted from the Rio for threatening to punch Jeff Lisandro in the face. The story is becoming a sadly familiar one.

Let’s hope action is calm, fun, and fight-free on Friday!

Nearly 1,000 players turned up for the low buy-in PLO event:

Day 2 took the field from 113 players down to just 11. Day 3 brought them back, and AP Phahurat exited in 11th place and Dapreesch Scates followed in tenth, each for $14,908. That set the final table of nine.

Brandon Paster was the chip leader at that time, and Marcel Vonk was always nearby. The two eventually made it to heads-up play, and Paster claimed victory in just three hands.

This championship event offered some Stud-8 for a high price tag, and there were more than a few takers:

Day 3 started with the 13th place elimination of Todd Brunson for $25,569. Others who followed included Ted Forrest and ESPN commentator Norman Chad. Richard Sklar busted in ninth place for $34,550, and the final table began.

Danzer led the table of eight and continued his dominance, taking the most chips into heads-up play. John Racener fought back but never gained enough ground to stop Danzer from winning his second gold bracelet of the summer.

With 80 fewer players than the year before, this $3K NLHE event started on Wednesday with these numbers:

Day 2 brought 205 players back and burst the money bubble in the late afternoon hours to begin payouts at $5,145. Some of the competitors who exited later in the evening included Barny Boatman, Chris Bell, Dan O’Brien, Jesse Sylvia, and ultimately Pierre Neuville in 27th place for $16,573.

There were just 26 remaining at the end of the night with these five in the lead:

The first tournament that began on Thursday was a championship one, with no late registration and a pairing selection to start the day. The numbers were down quite a bit from the year before, though:

There were four rounds of play on Day 1, which resulted in just 16 players still in the field. Each of them is guaranteed at least $26,584 for making it that far, and the eight matches were set for Friday as follows:

There were 16 game options for this new event on the schedule, and after some initial confusion, the action was fairly smooth. The final registration numbers were:

The day played down to just 95 players during a day that most of them described as fun and exciting. The top five listed when the chips were bagged were:

Event 39 will play down to its final table with the goal of finding a winner.

Events 40 and 41 will play down to their final tables or matches.