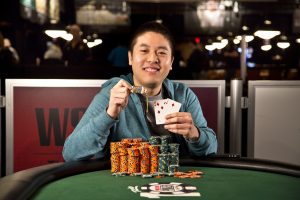 Often in tournaments, the original chip leader of the day doesn’t win. But on Wednesday at the 2014 World Series of Poker, Steven Wolansky and Brian Yoon held strong leads in their respective tournaments and went on to claim gold. Wolansky won his first, and Yoon captured his second piece of WSOP gold.

Today looks to be full of excitement.

The turnout for the $10K NLHE Heads-Up championship tournament each year varies, as last year had a 512-player max but only garnered 162 entries. This year, the event begins at noon, and organizers hope for a bigger turnout than in the past. Look for some big names to take their seats in this event.

Later in the day, the first-ever Dealer’s Choice tournament begins with a $1,500 buy-in. Players can choose from 16 games at their tables. The staff is confident in the dealers’ ability to get through this one, but confusion could be the word of the day. It will be interesting to see it play out.

This event constituted a success for the WSOP, not only for a solid field, but for attracting quite a few more players than the previous year:

Day 2 thinned the field from 170 players down to 23 of them, with Jeff Madsen in the lead. Day 3 then started with the 23rd place elimination of Olivier Busquet for $18,095, followed by that of Eric Froehlich, Ravi Raghavan, and Jeff Madsen.

After Nick Grippo took home $42,755 for ninth place, the final table was set and played on with Brian Yoon as the chip leader. Tony Cousineau and Dan Smith exited early, and only four players were still in at the dinner break. Yoon eventually got heads-up with Josh Arieh with nearly even stacks, but Yoon claimed victory less than 20 hands later.

With more players interested in low-limit buy-in mixed games, this tournament was a hit:

Day 2 had only 38 players to start and not only arrived at the final table but started to play through it. Day 3 brought back the final six to play on.

Steven Wolansky was the chip leader going into Day 2 and Day 3, and he continued dominating until going to heads-up against Joseph Cheong with a shorter stack. He staged a solid comeback, however, and won the tournament.

The low buy-in field was slightly smaller than the previous year but still featured these impressive stats:

Day 2 started with 113 players, all of whom were in the money and guaranteed at least $2,480. By the time of the evening dinner break, only 27 players were in still in action with AP Phahurat in the chip lead.

After dinner, players like Will Durkee, Martins Adeniya, and Erick Lindgren exited the field, and the 12th place elimination of James Hoeland for $14,908 was the last of the night. Play ended with 11 competitors, the top five of whom were:

The championship version of the Seven Card Stud Split event wasn’t as popular as many hoped, but it was a stacked field nonetheless:

Day 2 still had 75 players in action, but thinned that number slowly but surely throughout the afternoon and evening hours. At the dinner break, there were still 24 players, and original chip leader George Danzer was still at the top of the leaderboard.

Late into the night, the money bubble loomed, and it was bracelet winner Alex Bilokur who departed in 17th place with no money this time. Tom Koral was the first to cash for $22,244, followed by Matt Glantz for the same amount. Steve Zolotow took home $25,569 for 14th place, and play ended soon after with 13 players. The top five on the board were:

The only new tournament on Wednesday was a $3K NLHE, which drew less interest than the previous year:

The first day of play reduced the field to 205 players, quite a bit away from the money. But these top five players in the unofficial chip counts had a leg up on the rest:

Events 37 and 38 will attempt to find their winners.

Event 39 will play down as far as possible with the goal of a final table.