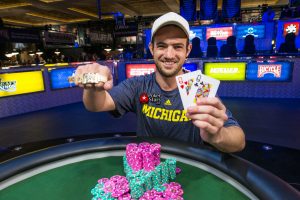 There were two exciting final tables happening in the Amazon Room at the Rio on the night of June 16. Many took an interest in the tournaments, especially the $10K NLHE Six-Handed event that offered the chance to watch several big names compete.

Brett Shaffer took down the other final table of the night, doing something that most players only dream of. He won a high-payout NLHE tournament for a bracelet, just a year after winning his first. Two bracelets in two years is quite the accomplishment, especially for an up-and-coming pro.

As we proceed with the WSOP over the halfway hump, join us for all of the action at the Rio … or keep it here for the daily updates to keep you as informed as possible.

This particular $1,500 NLHE event at the 2014 WSOP started with these figures:

After Day 2 thinned the field from 187 to just 15 players, Day 3 took care of the rest. Jonnie Kedj was the first to exit on Monday, taking home $18,583 for the 15th place finish, and the tenth place bustout of Steven McNally for $23,317 set the final table.

RJ Sullivan started as the chip leader but trailed Brett Shaffer going into heads-up play. It only took 13 hands for Shaffer to grab the gold, his second one in two years.

The short-handed championship event brought an impressive field to the Rio:

Day 2 reduced the number of players from 97 to 13, all of whom returned on Day 3 to play for the bracelet. Layne Flack was the first to bust for $28,414, and he was followed by Lee Markholt, Scott Clements, Hiren Patel, George Danzer, and Kyle White. The elimination of Martin Jacobson in seventh place for $66,382 set the final table.

Action moved forward through the night, and the third place exit of Max Silver set off heads-up play with Jeremy Ausmus leading Joe Cada. The latter came on strong and chipped up as the two battled back and forth. Finally, Cada doubled through to 7.38 million chips, and short-stacked Ausmus doubled but then tried again with jacks only to meet the queens of Cada. The 2009 WSOP Main Event champion captured his second bracelet.

One of the mid-Series $1K NLHE events drew this field and payout numbers:

Day 2 brought 115 players back to the felt, all of whom were in the money and guaranteed at least $2,369 for their efforts. Some who cashed throughout the afternoon and evening were Mickey Appleman, Victor Ramdin, Pierre Neuville, Todd Terry, Dan Kelly, and Martin Finger.

Faraz Jaka ultimately busted in 11th place for $16,088, leaving just 10 players at the unofficial final table for the last day of play. They were:

A low buy-in Stud event proved quite popular and registered these numbers:

Day 2 had only 60 players when it started and thinned the field to the money bubble. Cashes began in the afternoon hours with players like Robert Mizrachi, Cyndy Violette, Marcel Luske, John D’Agostino, Vladimir Shchemelev, Robert Turner, Phil Laak, and Bryan Campanello exiting in the money.

Daniel Negreanu finished tenth and Steve Sung ninth, each taking home $8,504, and the final table was set Bryn Kenney at the top of the leaderboard. Play moved forward as David Prager and Mallory Smith took to the rail, and the night ended with these six players remaining:

A higher buy-in NLHE tournament offered an eight-handed format for players looking for a challenge just past the midway point of the Series. When registration closed, the stats were as follows:

The first day saw quite a few players leave the field and only 170 to bag their chips when play stopped. Without official chip counts released, the top notables in the field were listed as:

With so many mixed game players coming up in the game, this seemed like a good event for schedulers to add for 2014. The low buy-in 2-7 tournament drew a fair amount of interest:

There were only 38 players still holding chips when play stopped for the night, and the official chip counts revealed these at the top of the leaderboard:

Events 33 and 34 will play through their final tables.

Events 35 and 36 will try to set their final tables or get as close as possible.

this is one of my favorite players undoubtedly was esperarce any victory in this time good friend Mr.