On WSOP Day 20, the focus was back on the man of the summer: Jason Mercier. He finds himself in contention yet again for a gold bracelet. This time it’s in Event #32, the $10,000 Omaha Hi-Low Split-8 or Better. 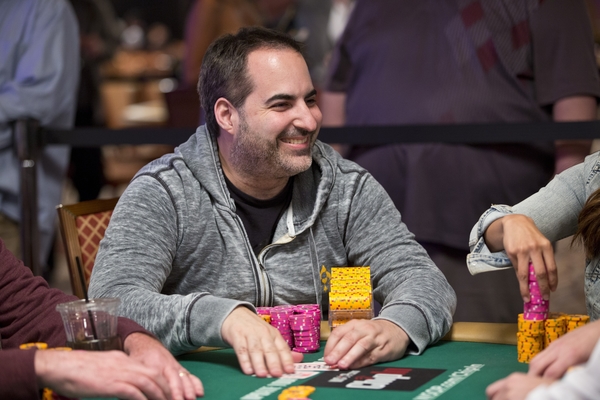 Matt Glanz will start the day at the Rio with the top chip count in Event #32, the Omaha Hi-Low Split/8 or Better championship. He’ll have to fight off a lot of star power, including the Bracelet Gatherer of 2016, Jason Mercier. (Image: pokerphotoarchives.com)

After two days of play, the PokerStars Team Pro and five-time career bracelet winner is 8th in chips out of 16 remaining players. On Tuesday, Mercier will try to take down his third win of the 2016 World Series, but even a top-two finish would make it his  fourth time this summer to have reached that summit in a $10,000 buyin event, which ain’t nothing to sneeze at.

It’s all somewhat reminiscent of Brian Hastings’ 2015 remarkable performance. Hastings won a pair of WSOP titles and cashed in seven events he played in Las Vegas, along with another he took down over in Europe. It was the “Summer of Hastings” last year, and now Jason seems primed to take over that mantle.

Even more impressive is that Mercier has already accomplished just halfway through this year’s Series what Hastings did in the entire one last year. Everything else, at this point, is just gravy for the poker pro.

Possibly financial gravy, of course, because achieving a goal so unlikely would make him a legend, and legends have lots of endorsement (re)negotiating power.

Ian Johns is also a two-time bracelet winner this summer. And this may be hard to believe, but this isn’t the first time two players have won multiple bracelets this early in the series. Mercier and Johns have done so this year through 28 events so far, but back in 1993, Ted Forrest, Phil Hellmuth, and Humberto Brenes each won two bracelets through just 20 events. A record like that may never happen again.

For Mercier to score his third title, he’s going to have to overcome more than a two-to-one chip disadvantage to current top chip count stacker Matt Glantz. And there are many other great players remaining in the field as we move into Day Three of Event #32 today as well, including Todd Brunson, Eli Elezra, Benny Glaser, Shaun Deeb, and Daniel Alaei.

Glaser is looking to join the multiple 2016 bracelet winners club. He also won Event #16, $1,500 Omaha Hi-Low Split-8 or Better, so he’s on a roll and no doubt feeling confident as he kicks off play today in the #7 chip count spot for the Omaha Hi-Low Split/8 or Better championship.  Play resumes at 2 pm PT.

With 16 players left, this event is already running behind. Today is scheduled to be played down to a winner, but it was also supposed to be down to the final table for start of play, so we’ll have to see how fast and furious the action is and if they can catch up by end of play this evening. 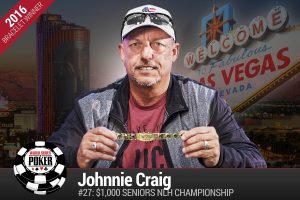 54-year-old Texan Johnnie Craig took down Event #27, the $1K Seniors championship, for over half a million in cash. (Image: WSOP.com)

Johnnie Craig, a 54-year old Army veteran from Texas, won his first World Series of Poker title in Event #27, the $1,000 Seniors No-Limit Hold’em championship. It was only his second career cash at the summer series. His first came in the same event in 2014.

Back home, Craig owns a restaurant and some snow cone machine trucks. The $538,204 he just won should help grow his businesses and give him a nice little nest egg.

Meanwhile, over in Event #29, the $1,500 No-Limit Hold’em, play was supposed to conclude on Monday. But heads-up play between Jens Grieme and Alexander Ziskin lasted more than 200 hands before the powers that be decided to wrap it up and come back on Tuesday to finish it off.

Grieme has 7,790,000 chips (which is 39 big blinds) to Ziskin’s 5,690,000 (28 big blinds). After an intense heads-up match, it’s still anyone’s game. But, knowing how crazy the game of poker is, this tournament will probably either end on the first hand of Day Four, or drag on for five hours. We shall see soon enough.

When Day Three started, there were 31 players remaining. David Williams, a 2006 bracelet winner and popular player, began the day with the chip lead. Things didn’t go his way on Monday, though and he busted in 12th place.

Germany’s Grieme and Oklahoman Ziskin have a combined zero bracelets. They do have 18 career cashes at the summer series between them now, however. One will walk away with $401,494 on Tuesday. That is, of course, assuming it ever ends.

Ortnyskiy won his first bracelet and now has nearly $700,000 in career WSOP winnings. After finishing off Lebron on Monday, he was rather emotional, but had a hard time finding the right words to say. He simply said, “it’s amazing” following his impressive victory. That’s all that needed to be said, of course. Amazing, indeed.

The first-ever Summer Solstice moves on to Day Two, and some big names move with it. Although Event #33 pulled a smaller-than-expected field of just 1,840, there are still some serious pros in the remaining 445 players returning today. Among those are Kathy Liebert and Olivier Busquet, so this will be an interesting one to watch. Although slated as a five-day event, the smaller starting field may see it wrap up a day early, to be determined.