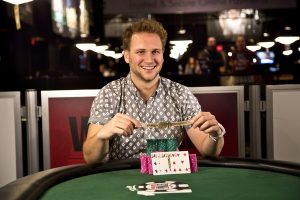 Pierre Milan won his first gold bracelet on Sunday at the 2014 World Series of Poker, as did Calvin Anderson. The latter is best known for his dominance in online poker, having played as “cal42688” on PokerStars and Full Tilt Poker for years. Most of his winnings have come on PokerStars with over $4 million there, but he also has more than $1.2 million on Full Tilt and notable sums on sites like 888poker and networks like Ongame.

With more than $5.5 million in lifetime online poker earnings to date, winning less than $200K wouldn’t mean as much in a live tournament, but it was accompanied by a WSOP gold bracelet. It showed that his passion for poker translates well from online to live events, as many poker fans already knew.

The WSOP is near its halfway mark, and the results of today’s events will put us into the official second half of the schedule. Where did the time go?

This $2,500 NLHE tournament attracted a solid number of players on Friday:

Day 2 thinned the field from 209 players to 20, and Day 3 moved it forward. Players like Williams Reynolds and Rep Porter departed early in the afternoon, and David Benefield ultimately bubbled the final table with a tenth place finish for $30,267.

The final table proceeded with Jamie Armstrong in the lead, Andy Phan in second, and Matt Salsberg in third. But the two chip leaders lost ground and exited early, while Salsberg held on for a third place finish. Meanwhile, Justin Oliver and Pierre Milan started heads-up play with nearly even stacks, but Milan took a big pot on the second hand and took victory on the third.

Well over 500 players wanted in on the low buy-in Stud Hi-Low action offered by Event 30:

Day 2 started with 129 players but whittled that number down to 12. Day 3 started with the 12th place elimination of Matthew Kelly for $9,501, followed by that of David Brooker. Robert Goldfarb took $12,121 for tenth place, as did Ted Forrest for ninth.

The final table began with Joe Tehan in the chip lead and Melissa Burr at her second final table of the 2014 Series. Burr ended her run in fifth, and the third place bustout of Eric Kurtzman launched heads-up play with Calvin Anderson leading Tehan by more than two to one. It didn’t take long for Anderson, a star of online poker, to capture his first WSOP bracelet.

This Saturday’s $1,500 NLHE event had an average showing for a mid-Series event:

Day 2 brought 187 players back to the tables, and the money bubble quickly burst to pay players like Jackie Glazier, Nenad Medic, Erik Cajelais, and Perry Friedman. Play then stopped with 15 survivors and Matt Stout in the lead. The top five chip counts belonged to:

The only thing players like better than a six-handed tournament is a $10K NLHE Six-Handed championship event. They turned out in these numbers:

Day 2 put 97 players back at the tables, and it took a while to burst the money bubble. When it happened, players like Larry Wright, Matt Waxman, Sam Greenwood, Nick Schulman, Jared Jaffee, Ben Volpe, Ashton Griffin, and Igor Kurganov cashed.

After Brock Parker exited in 14th place for $28,414, play ended with quite a few big names remaining, like Lee Markholt, Erick Lindgren, Martin Jacobson, Layne Flack, George Danzer, JC Tran, and Scott Clements. But the top five on the leaderboard were:

With so many low buy-in NLHE tournaments, this didn’t prove to be one of the best attended of the lot. The registration numbers settled at:

Play moved quickly, and the field broke through the money bubble late in the evening. Some of the players to end their runs with cash were Alex Masek, Fernando Brito, Jason Koon, and Kyle Cartwright. Approximately 115 players remained in the tournament. Though official counts have not yet been released, these were the top five players listed:

The late-afternoon event on Sunday was a regular Stud event with a low buy-in. There were more than a few interested parties, as evidenced by the registration numbers:

Stud brought a number of well-known mixed game players to the field, but only 60 of them survived the first day of play. With names like Phil Laak, Alex Kravchenko, and Cyndy Violette still in action, the unofficial top five showed these players with a few more chips than the others:

Events 31 and 32 will play on and through their final tables.

Events 33 and 34 will try to set their final tables or get as close as possible.