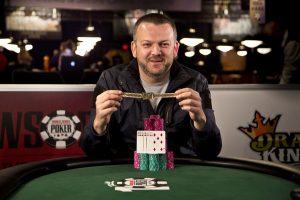 Event 24 tried to give away its gold as well, but World Series of Poker Circuit star Kevin Eyster and European Poker Tour satellite expert Pierre Neuville were both set on taking it. That left two remaining late into the night, and they will return to play for the win today.

Off the felt, players continued to debate the penalty given to Mike Matusow in Event 25, which cost him one round of play and led to his elimination soon after on Day 2 of the tournament. The tournament staff was left standing alone in its decision, as even some WSOP officials were not thrilled with the ruling for excessive celebration. This debate will likely continue.

So will the tournaments. Keep your eyes here for the latest!

The $5K NLHE Six-Handed event was supposed to be a three-day event but will now run into a fourth day. It all started with these numbers:

Kevin Eyster took the lead over Bryn Kenney to that last table with Pierre Neuville as the shortest stack. But the latter chipped up as David Borrat, Jeremy Kottler, Bryn Kenney, and Andrew Lichtenberger exited. Neuville started heads-up play with 4.72 million chips to the 3.4 million of Eyster, and the two battled back and forth until play finally stopped.

The two finalists will return on June 13 to play for the title.

This popular tournament began with these stats:

Day 2 reduced the field to just 18 players, all of whom were playing for at least $7,784 in prize money but going for the top prize.

John Kabbaj led the unofficial final table of nine players, and Tyson Marks then exited in ninth place for $18,519. Joe Tehan then took the lead into action, and names like Tom Schneider, Mike Leah, and Erik Seidel departed. Tehan busted in fifth place, and Terrence Hastoo and Chris McHugh followed. Kabbaj then took the lead into heads-up play and rather quickly beat Thomas Keller for the win.

Another $1,500 NLHE started with a predictably strong field:

Day 2 brought back 178 players and quickly jumped into the money portion of the tournament. As the day and night wore on, players like Mike McDonald, Scott Clements, Theo Tran, Joe Serock, and Phil Hellmuth busted. Nick Schulman took 14th place, and the 13th place elimination of Anthony Spinella for $18,162 ended the night.

The top five chip counts for the final day of play were:

The $1,500 HORSE tournament in 2013 had an impressive turnout, but this year’s event drew more than 100 fewer players. The final registration numbers were:

Day 2 brought the field down to just 160 players, only half of whom were set to make the money. The leaderboard showed these as the top five chip stacks:

In an effort to offer players more $10K championship opportunities, Pot Limit Hold’em was put on that schedule this year. The number of interested players was small, as shown here:

Quite a few players exited the tournament early in the evening and later in the night on Day 1, leaving only 66 when play ended. The top five were listed as:

Event 24 will continue its heads-up match to determine a winner.

Event 26 will play to and through its final table.

Events 27 and 28 will move closer to their final tables.