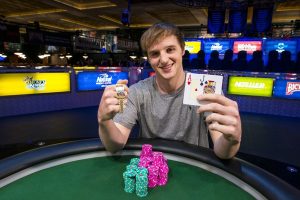 The big news of Day 14 was the playdown of big final tables. Ted Gillis prevented longtime poker grinder John Hennigan from a win, and Kory Kilpatrick captured his first gold as well.

Meanwhile, quite a few fans had their eyes on the updates of the $10K HORSE event, though favorites like Doyle Brunson exited in the evening hours. But others like Bertrand “ElkY” Grospellier, David Benyamine, Daniel Negreanu, and Justin Bonomo remained to battle for a coveted title.

And the Turbo NLHE event was so fast that most players couldn’t keep up. They reached the final table by the end of the first day, and Day 2 should be a quick one as well. Blink and you’ll miss it!

After Day 2 thinned the field from 233 players to 12, Day 3 had the job of finding a winner. Action started with a double elimination of Ron Mcmillen and Gregg Merkow in 12th and 11th places, each for $29,709. On the final table bubble, there were numerous double-ups until Darin Stout was ousted by Ted Gillis in tenth place, also for $29,709.

Mustapha Kanit took a lead into the final table, another double elimination on the seventh hand made things interesting, and play then moved more quickly. Kanit ended up out in fifth, and Gillis was soaring. He took a chip lead into heads-up play against John Hennigan and never let it go. Gillis claimed his first bracelet.

Round 1 of the first Shootout of the Series brought forth these fine figures:

Day 3 was also Round 3 and the final one to determine a winner. All 10 players had between 338K and 354K chips, so play was quite slow in the beginning. By the dinner break and over 100 hands played, only one player exited.

Action picked up after dinner, with Taylor Paur and Phil Galfond leaving in seventh and sixth places, respectively. Chris Bell went from chip leader to fifth place finisher, and Kory Kilpatrick and Eric Wasserson dominated before taking it to heads-up. Kilpatrick won the last of many battles between the two to take home the gold.

The second $1K NLHE event of the summer provided these final registration numbers:

The second day of play brought 168 players back to the felt, all guaranteed at least $2,059 for their efforts. Departures were fast at first, and later, players like Erik Seidel, Jason Koon, David Williams, Mukul Pahuja, and JC Tran headed to the cashier cage. Play slowed at the end of the night, though, as the payout jumps increased. After the 17th place exit of Arthur Baraan for $12,245, play stopped. The top five on the 16-player leaderboard included some big names:

The HORSE Championship this year was bigger than most expected:

There were still 121 players in contention when Day 2 began, and that number thinned to just 52 by the dinner break. The day’s original chip leader, Jeff Madsen, bubbled the tournament late into the night in a Stud hand versus Greg Mueller and David Benyamine. Chris Klodnicki was the first to cash for $18,254, and Greg Mueller and Tom Koral followed, each for the same payout.

Play then stopped with 21 names on the leaderboard. The top five were:

When they say Turbo, they’re not kidding. Online poker players adore Turbo tournaments, and this tournament proved that live players do as well. The numbers were very solid, though not what they were last year:

There was no time wasted in this tournament. Departures were fast and furious throughout the day, with the money bubble reached only about six hours into the day. Some of those who cashed later in the evening included Nam Le, Charles Moore, Matt Glantz, Tim West, and Ryan Laplante. Finally, Amanda Baker was eliminated at the hands of Andy Philachack, and play stopped.

The final table was set for June 10 as follows:

Events 21 and 22 will move on and through their final tables.

Event 23 will play its final table.