WSOP Day 14 is now in the books. Three players won a bracelet on Tuesday and two players became millionaires. Just another day at the beautiful Rio All-Suites Hotel and Casino in Las Vegas for the World Series of Poker 2016.

One of the most popular tournaments of the summer, Event #14, the Millionaire Maker, which was a four-day event with a $1,500 buy-in, guaranteed the top two finishers would receive at least $1 million. 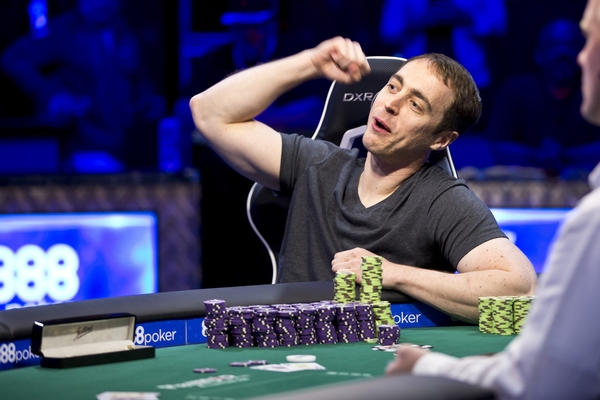 What a boy wants: Jason Dewitt lets out some joy upon taking the #1 spot and $1,065,403 in the Millionaire Maker, Event #14 on Tuesday. (Image: pokerphotoarchive.com)

Yesterday on Day Four, the exciting event concluded with Jason Dewitt and Garrett Greer receiving the seven-figure paydays. Both players are Californians. Dewitt ended up winning the bracelet and an extra $65,403 on top of the $1 million for being #1.

With both players guaranteed seven figures and only a “small” amount given to the actual winner, when heads-up play began, the only thing that really mattered to either player was the coveted gold bracelet. After all, what’s an extra $65K between friends, anyway?

Dewitt and Greer weren’t the only ones to go home with a massive payday in Event #14. The top eight finishers all received a six-figure check, including Lisa Meredith in 3rd place, who received a nice $500,000 cash. It was her first-ever WSOP cash. She’s a kindergarten teacher and likely won more than she would make at her current occupation in the next decade in just four days. That’s what makes the World Series so awesome.

Meredith was one of just one of 246 women to enter the tournament out of 5,233 players. Another woman, Sofia Lovgren, also finished in the top 12. Which goes to show that just because only a small percentage of poker players are female doesn’t mean the ladies can’t play just as well as the men, including in massive field events. Hopefully, these results draw more women to the felt in future events.

For the Vancouver, Washington-based Meredith, this also gives her the distinction of hauling the largest cash for a woman so far in this year’s Series. Her only other tournament cash ever was at the Wildhorse Resort and Casino in Pendleton, Oregon, where she took first just two months ago for $10,733 in the $100 buyin Spring Poker Roundup event. Way to go for a relatively inexperienced player of either sex for that track record.

It will be interesting to see if the noble, but infamously underpaid, teaching profession will continue to hold Meredith’s interest going forward, or if she decides to devote more time to the felt now.

Johnson Makes a Name for Himself

The name Marco Johnson might not be a household name to casual poker fans. But it’s time for this guy to get the respect he deserves.

The poker pro from California had already impressively cashed 31 times in his career, including a 2013 bracelet, heading into Event #18, $3,000 H.O.R.S.E. Now he has another bracelet to admire with his first one.

Johnson won $259,730 for 1st place, besting a field of some of the top players in the game. Eli Elezra, Chino Rheem, Justin Bonomo, Phil Hellmuth, Robert Mizrachi, and Shannon Shorr also cashed, so beating this amazing field is a win in and of itself.

Event #17, the $1,000 No-Limit Hold’em championship, went to a man who had never cashed in a WSOP event prior to this one. Chase Bianchi from Columbia, Maryland took down the top spot by outlasting 2,242 players. 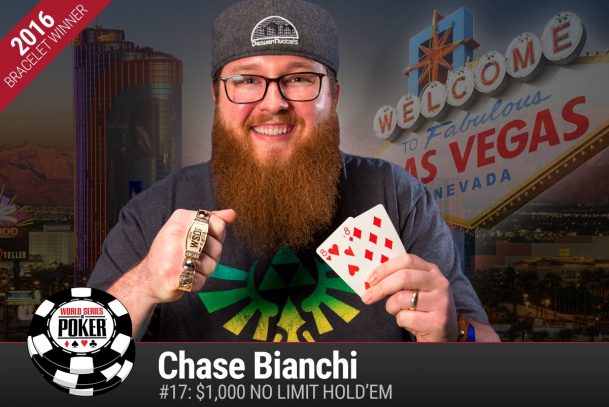 Bianchi, sporting a lengthy beard and looking quite hipster, said after the event he had been out in Las Vegas for two weeks and was headed for home on Wednesday. He had already played in numerous poker tournaments this summer. One day before heading back east he finally won a big one and will be going home with a nice $316,920 check.

Garvin will be chasing his first career bracelet, but does have four cashes at the World Series of Poker since 2012, including one in the recently completed Millionaire Maker. In order to score that bracelet and $185,317, he’ll need to outplay some talented pros on Wednesday, including poker pro and hedge fund manager Dan Shak.

Jason Mercier already won his fourth career bracelet this summer, but he isn’t stopping there. The PokerStars pro and Doug Polk rival will head into the third and final day of Event #20, the $10,000 Seven Card Razz, with a sizable chip lead.

Mercier’s 1,595,000 chipstacks are well above Jon Racener’s 1,174,000 second-place ones. There are eight remaining players. Racener has 38 career cashes, including a runner-up finish in the 2010 Main Event, but no bracelets.

Over the past couple of months, Doug Polk, a top pro, has publicly criticized Mercier’s play. He even went so far as to call him a “bad reg”. For a “bad reg,” Mercier sure does win big events often, so Polk may need to eat his words. Perhaps the antagonist will generously reevaluate Mercier’s play if he wins his fifth career bracelet later today.