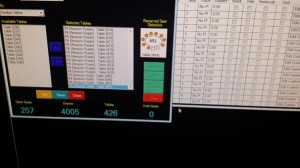 Friday was the first day of the wildly popular $1K buy-in NLHE Seniors Championship, a tournament reserved for players over the age of 50. And once again, the turnout set a record for the event, surpassing the previous year’s total by more than a handful of players. It was another impressive tournament at the 2014 World Series of Poker.

Meanwhile, Nick Kost defeated a tough final table to win a bracelet in Event 14, and Phil Hellmuth showed his determination in Event 15 by making it to the final day of the event with a very solid chance at claiming his record-setting 14th bracelet.

A low buy-in, a big field, and an impressive prize pool led to these numbers for Event 14 of the 2014 WSOP:

Day 2 thinned the field from 220 players to 26, and Day 3 played down to the final table. Along the way, players like Chris Tryba, Dan Heimiller, Frankie O’Dell, Maria Ho, and Gary Benson exited.

The official final table of nine began with Kal Raichura in the lead, Alex Luneau in second, and reigning champion Calen McNeil in third. Kal was the one who soared, but short-stacked Nick Kost pushed ahead and overcame a serious chip deficit in heads-up play to emerge as the winner.

With a little higher buy-in than usual, the NLHE short-handed action started with these numbers:

Day 2 brought only 144 players back with Brandon Cantu in the chip lead. The money burst fairly early in the day, and Brian Roberts was the first to cash for $5,041. Joe Tehan followed, as did Michael Mizrachi, Nenad Medic, Tony Dunst, Sorel Mizzi, Will Failla, Paul Volpe, and Cantu. Olivier Busquet and Jackie Glazier were late exits, and the final 15 players bagged their chips.

Phil Hellmuth will go for his 14th gold bracelet in sixth position on the leaderboard, following these top five competitors:

The low buy-in Lowball action brought in a fair amount of interested parties on Day 1:

Day 2 had only 54 players still in the running, and when the payout portion of the tournament began, names like Dan Kelly, Todd Brunson, Layne Flack, Stephen Chidwick, Bill Chen, and Mike Leah exited with cash.

Only six players will make the actual final table, but Day 2 stopped with nine bagging their chips. The top five of the remaining field boasted these counts:

People often make fun of “Seniors Day” at the WSOP for the number of scooters contrasting with slow-moving players in the Rio hallways. But most recognize it as an important day for the players and a time for many pioneers in poker to take their shot at the spotlight. The field was slightly bigger than the year before, as shown by these registration numbers:

The field was drastically reduced by the end of the night, as only 486 players survived. The top five on the leaderboard were:

Razz has become more popular in past years, enough so that a championship event with a $10K buy-in was on the schedule in 2014 for the first time in the Series’ history. The results were:

Only a relatively small number of players busted the tournament on Day 1, leaving 76 remaining and these five with the lead:

On Tap for June 7

Events 17 and 18 will try to set their final tables by the end of the night.