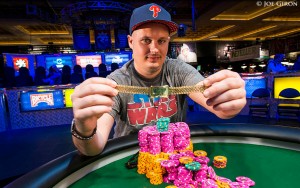 You only live once. That’s a somewhat worn slogan for many people, but it could have been the rallying cry of Gregory Kolo, who soared through Event 12. He went wire-to-wire at the final table and won his first WSOP bracelet.

Paul Volpe has stormed onto the poker scene in the past few years, capturing wins at the EPT Monte Carlo Grand Final and LA Poker Classic. He has several near-misses at World Poker Tour final tables to his credit, and he now has a WSOP gold bracelet. And he did it by defeating the very tough and determined Daniel Negreanu, who not only wanted his sixth bracelet, but an advantage in his sizeable bracelet bet with Phil Ivey at the 2014 WSOP. But Volpe prevailed and took it down.

One of the most fun tournaments of the Series is on tap today, as the senior players (50 and over) gather for a very early 10am start at the Rio for their championship event. Best of luck to them today!

The first Pot Limit Hold’em event of the series started this way:

Day 2 pushed the field from just 69 survivors down to the eight final tablists, though the ninth place exit of Phil Collins to end Day 2 counted as part of the final table action.

Gregory Kolo started Day 3 with the chip lead, and Kazu Oshima was in second place. While others fought for the rest of the chips, Kolo and Oshima remained strong and took their battle to heads-up play. It lasted only a few hands, though, and Kolo claimed victory.

The championship Lowball event became one of the most popular of the World Series of Poker so far this year, and it started with these numbers:

Day 2 started with 36 players but reduced that number to just seven players. Day 3 then kicked off with a final table that saw Paul Volpe in the lead, Jason Mercier trailing, and Daniel Negreanu seeking a sixth WSOP bracelet third in chips.

Any one of the players, including Brian Rast, Larry Wright, John Monnette, and Abe Mosseri, had the potential to take it down, but the top three made it to three-handed play, and Volpe took on Negreanu heads-up. The two battled for about 85 hands, but Negreanu could never take over the chip lead. He finally succumbed to Volpe in the end, the US pro took home his first bracelet.

This non-Hold’em option with a low buy-in did really well with players, revealing these final numbers on Day 1:

Day 2 brought 220 players back for some Omaha action, and the money bubble did burst so half of them could start taking payments of $2,657. Marcel Luske was one of the first to cash, and others like Eric Baldwin, Susan Genard, Stephen Chidwick, Dan Kelly, Mickey Appleman, and Erik Seidel hit the cashier cage throughout the evening.

Only 26 players remained when play stopped, and the top five on the leaderboard had these chip counts:

The noon event on June 5 was a No Limit Hold’em Six-Handed event with a $3K buy-in, and final registration numbers showed almost the exact same interest as in the same event from 2013:

The vast majority of the players departed on Day 1, as only 144 of them bagged chips at the end of it all. And some very prominent names were in the top five on the leaderboard:

Players clamored for non-Hold’em games at low buy-ins, and they responded well when this one began late on June 5:

Most players did not make it through the day, as per usual, and of the 54 who were left standing, the unofficial top five were:

On Tap for June 6

Event 14 will play for the win.

Events 15 and 16 will attempt to set their final tables.