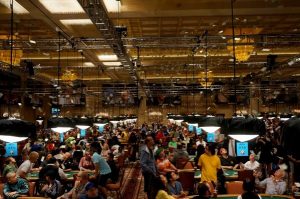 It literally rained money as the WSOP kicked off on Tuesday. (Image: WSOP)

It’s official: the 2014 World Series of Poker is now underway in Las Vegas!

This year, the WSOP staff arranged for something a bit different: those who were taking their seats for Event 1 received a surprise as cannons exploded around the room with $10,000 in $1 bills. Perhaps even more surprising was the choice of accompanying music: “Get Money” by Junior Mafia. Players scrambled to collect some free money before the tournament actually began.

After the free money, players had to take their seats and earn the rest. The Casino Employees event offered the lowest buy-in of the Series and a chance for those who normally serve casino patrons to play for a gold WSOP bracelet.

Reigning champion Chad Holloway of PokerNews lost his attempt to repeat midway through the day, pushing A-8 against the Q-J of Sergio Trevino. But the board offered a queen and jack on the flop to eliminate Holloway.

The WSOP’s own Ty Stewart busted when his sevens ran into queens, and longtime player Bernard Lee was also one of the many casualties of the day.

The night ended with 51 players remaining and a poker dealer from Simi Valley, California, in the lead.

The Mixed Max tournament had a structure that allowed for nine-handed play throughout the first day, but Day 2 would play six-handed, Day 3 four-handed, and heads-up for the last four players on the final day. And putting a price tag of $25,000 on it brought some of the biggest names in the game into the action.

The event was filled with well-known players at every table, though more than half of them exited the field throughout the evening and late-night hours. But as that happened, one player emerged as a major contender, and it was no surprise that she was Vanessa Selbst. In the last 30 minutes of the day, Selbst eliminated Jake Schindler with quad jacks to beat his two pair and straight draw, which propelled Selbst into the chip lead.

There were 60 players bagging chips when play stopped, and the top-earning female player in the world had the most.

Events 1 and 2 will continue, as the former is predicted to find its winner and happy railbirds will watch the latter to see some of their favorite players shoot for gold.

Event 3 ($1K Pot Limit Omaha) begins at noon. There is no 4pm tournament.