Records were made to be broken. Day One of the $500 WSOP (Really) Big Fifty had over 25,000 entries, making it the largest live poker tournament in history. Official numbers and the prize pool will be released on Monday. 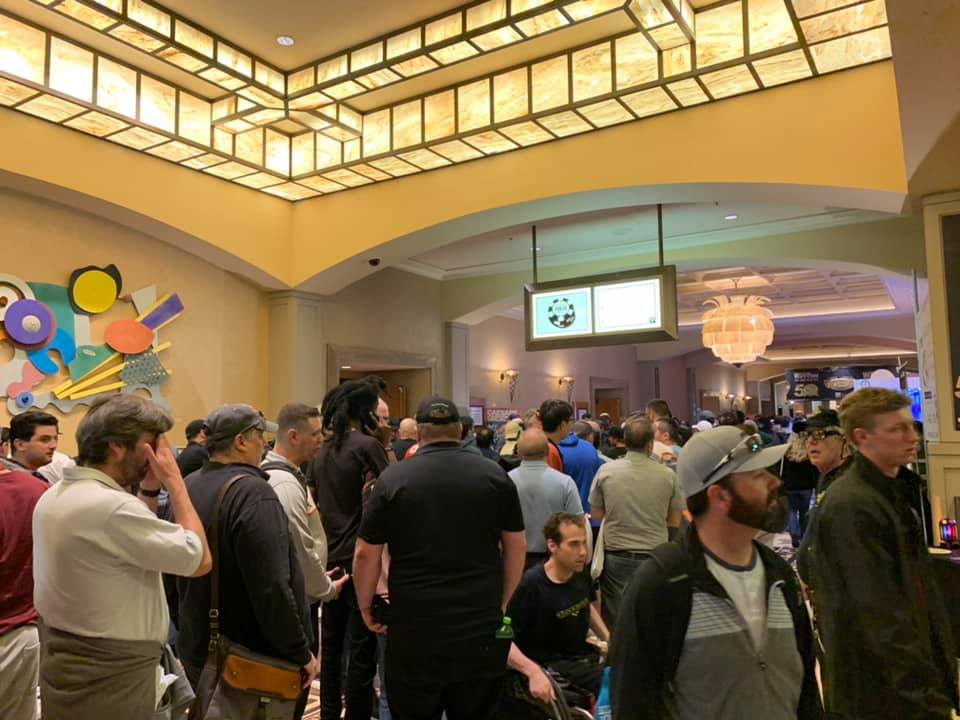 The 2015 Colossus, a $565 World Series of Poker event, held the previous record with 22,374. Cord Garcia won that tournament for a surprisingly low $638,880. Many expected the winner would take home over $1 million right up until the prize pool was disclosed.

The Big Fifty winner, however, is guaranteed at least a $1 million payday. But the eventual champion is likely to take home much more as there is at least $12.5 million in the pot, more than $7 million above the pre-tournament guarantee.

Every poker guru and WSOP staff member knew the Big Fifty would be a rousing success. But no one could have foreseen this massive of a turnout.

Heading into the tournament on Thursday, most anticipated around 18,000 entries, with the possibility of challenging the 2015 Colossus record. Suffice to say expectations were exceeded.

But the massive field brought about some problems for WSOP staff. On Friday, chaos ensued when thousands were forced to stand in line after registering to wait for a seat. Players weren’t busting fast enough to accommodate the demand.

A former bowling alley at the Rio was turned into a makeshift poker room to fix part of the problem. Day 2A’s start time was pushed back two hours due to the madness that the Day 1B, which was running at the same time, caused. Some players waited up to six hours just to get a seat while the blind levels continued to rise.

In the end, however, most were satisfied with the product. And why wouldn’t they be? After all, the fact that over 25,000 players entered a poker tournament is a sign that poker is booming.

Comparing it to 2015 Colossus

Bathroom breaks during the Colossus were quite a problem. There is only one restroom in the convention center hallways and a second one in the Rio casino a bit further. With thousands of players in each Day One starting flight, all of them going on break at the same time, most were forced to hold it in throughout the day.

Both tournaments, at least on Day One, created a parking problem. The convention center parking lot at the Rio is enormous but still isn’t quite big enough to accommodate so many players. On Saturday afternoon, hundreds of cars circled around the parking lot desperately hoping to eventually find a spot.

But the positives far outweighed the negatives in both events. Long wait lines and bladder irritation are worth it when well over 20,000 players enter. That’s good for the game.

These two events brought out a similar crowd: the recreational poker player. Most casual players can’t afford or don’t want to spend thousands of dollars to enter a poker tournament but they still dream of competing in the World Series of Poker. The Colossus and Big Fifty give those players that opportunity.

The Colossus had a faster pace of play with 30-minute blind levels and players starting with just 5,000 chips. That created quick bust outs, which allowed players to jump right into the action upon late registering. In the Big Fifty, many late registers had to wait for a seat due to the increased starting stacks (50,000) and blind levels (50 minutes) that gave competitors more play.

Day 2C began at 10 am on Monday with the 1,507 returnees from Day 1C (Saturday). The remaining players from Sunday’s Day 1D will come back on Tuesday for 2D. And then everyone still standing returns to the Rio for Day Three on Wednesday.

The problem was the PLO event running. If you have a hyper aggressive strategy through the re buy period, which is a normal strategy for PLO, YOU HAD TO WAIT IN THE SAME 6 HOUR OR MORE LINE TO REBUY…… In no poker world should that be o.k. They need to set up a separate registration room. I recommend a registration structure similar to a major marathon… OR … have it the only tournament going.. which is not going to happen. Rio lost a lot of money. People don’t want to wait in line to rebuy hours into the level ups…They lost BIG TIME in rake fees. They treat their players like cattle now. Increase the payouts so you play for days, and do not even double your money until you are pretty deep into the payouts. Just want to get as many people paid as possible so they can sign up for another tourney, feed the machines, and cash game rakes. The WSOP should be ashamed of themselves..IMO. The Aria had the best tournament structure this year by far. I think I ma just going to invest in other series around town. I want to have fun and feel like my business matters. Only 10,000 chips for a 1500 mixed game event. Just put a sign up that everything is bingo now. I should be able to survive a beat or two early on, before I have to put my tournament life on the line.