If you blinked, you missed CardsChat’s favorite pro Ryan Laplante’s first final table of the summer on Sunday, in the WSOP $2,500 No-Limit Hold’em event. We briefly held out hopes of seeing a classic short-stack hero vs. big-stack villain matchup, as Chris Ferguson entered the final table as chip leader. 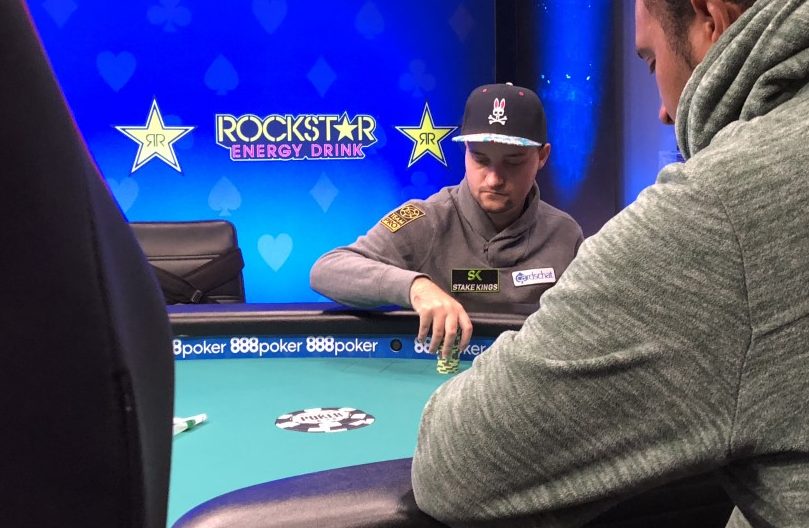 It’s rare that anyone at the Rio approaches Chris Ferguson with a nasty comment. It happens, but most save the vileness for social media. At Sunday’s final table, however, if you didn’t know anything about his past, you might have assumed he is one of the most popular poker players in the world.

Each time Ferguson scooped a pot, a loud cheer came from the crowd. He had friends in attendance who were there to show support for one of poker’s biggest pariahs as he embarks on something of a redemption tour.

But the reigning WSOP Player of the Year came up short, too, in his quest to win his first bracelet of 2018, and seventh of his career, busting in 4th place.

Laplante, dutifully patched up for CardsChat, entered the day with just 12 big blinds and knew he had an uphill battle if he was going to ship his second bracelet but was confident if he could win a couple of double-ups, he was going to be the man to beat at this six-player final table.

On the first hand, he got a small break with 6-5 in the big blind. Everyone else folded and let the short stack take it down uncontested.

“I won a pot,” he jokingly yelled to his rail.

Two hands later, Ferguson opened to 120,000 and Timur Margolin made the call from the cutoff. Laplante, looking for an opportunity to double-up or at least scoop a nice early pot, found a great hand to shove with: A♣J♥.

He put his remaining 760,000 chips in the pot and got “Jesus” to fold, but got snap-called by Margolin who was slow-playing A♦K♦.

“I need a jack,” the underdog proclaimed.

Despite the quick exit, an upbeat Laplante was all smiles on the way out of the Brasilia room at the Rio. He didn’t waste any time getting back to the felt and registered before the start of Day Two in the $10,000 Pot-Limit Omaha event across the hall in the Amazon room.

Laplante had a good go in PLO, bagging 672,000 chips. He’ll return to that tournament on Monday in 11th place out of 37 remaining players.

Whether you accepted his apology or not, Chris Ferguson isn’t going to leave the poker community any time soon and he’s still one of the best tournament players in the world. The 2000 WSOP Main Event champion and 2017 WSOP Player of the Year made his second final table appearance of the summer and had quite a sizeable and boisterous cheering section.

But not everyone was happy to see him at the final table, including Laplante who told CardsChat beforehand he would leave his opinions at the door.

“There are many players that bother me more to play with than him,” he said prior to Sunday’s final table start. “I don’t know how much control he had in the Full Tilt operations. I’m not a fan, and not happy to play with him at all, but I won’t be rude either.”

Any time Ferguson makes a deep run, social media explodes with negativity about the reigning POY from those calling for him to be banned from poker for life.

Long-time ESPN poker announcer Norman Chad, like Laplante, says he is unsure of Ferguson’s role in the 2011 Black Friday scandal that forced Full Tilt customers to wait more than thee years to receive their account balances after the site was shut down in the US by the Department of Justice.

“Almost everybody opining on Jesus knows almost none of the facts,” Chad, who announced the final table on Twitch, told CardsChat. “We should reserve judgment until we do know most or all of the facts.”

The ESPN broadcaster also said Ferguson’s “presence at the WSOP does not bother me.”

Unfortunately, for that rowdy bunch in the crowd, Ferguson missed two crucial draws at the final table and was eliminated in 4th place by Timur Margolin, the eventual champion, on the second of those tough hands.

Early at the final table, he three-bet shoved all-in on an open-ended straight draw against Michael Marder’s pocket aces and didn’t hit. On his final hand, he again flopped a draw – this time a flush draw – against Margolin’s top pair but, once again, couldn’t connect.

Ferguson has two 4th place finishes this summer and both times he’s been the chip leader for at least part of the final table.

In Event #31, $1,500 Seven Card Stud, he ran bad, three times losing massive pots thanks to a sick cooler. But the early exit on Sunday, some might argue, could have been avoided had he played the hand against Marder more conservatively.

On the flop, holding an open-ended straight draw against Marder, he bet out 200,000 and got raised to 600,000. In this situation, he could have just made the call instead of putting his opponent all-in for approximately 2.1 million.

Had Ferguson just called, with the board pairing on the turn, he could have check-folded to a likely shove from Marder and saved 1.5 million chips. After the board ran out blanks, Jesus appeared to be questioning his play.

But few can question his ability. Love him or hate him, Chris Ferguson, with six WSOP bracelets, 112 WSOP cashes, and more than $9 million lifetime in tournament winnings, is undoubtedly one of the best tournament players in history.

And if the crowd of disciples rooting him on is any indicator, he is back.

Well done Ryan, hope this final table spurs you on to great things this Wsop. You have flown the Cardschat flag well at wsop hoping for a deep run in the main for you.

Great finish and many more wins to come, Ryan! Thanks for your commitment to CardsChat comunity!!!!
Good luck !