Imagine busting out of the most prestigious tournament in the world with aces full. That was just one of many incredible moments we’ll long remember from the 48th annual World Series of Poker. 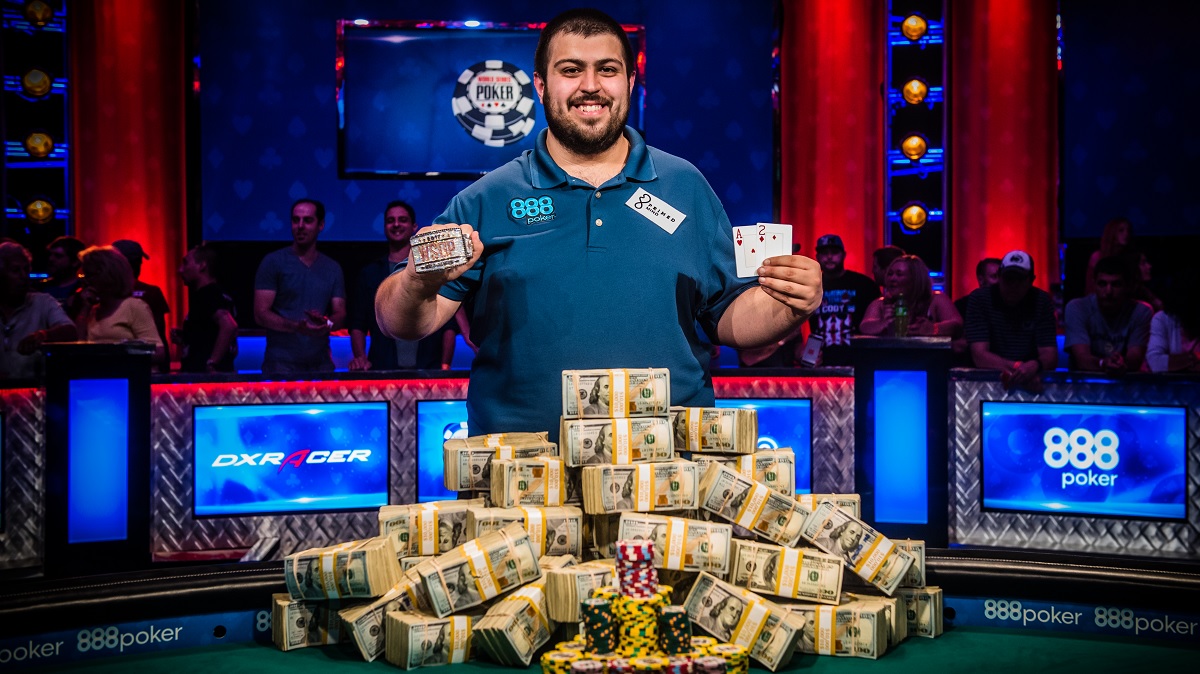 Scott Blumstein’s winning the Main Event on a river three-outer is the moment that just about everyone in poker remembers from the 2017 WSOP. (Image: 888poker)

There are certain times in poker when you get felted but easily could have avoided going broke. This isn’t one of those times. Vanessa Selbst, on Day One of the Main Event, got a dream flop with a set of aces against Gaelle Baumann’s set of sevens.

The Team PokerStars Pro, not wanting to slow-play the nuts, fired out a bet of 700 into a 1,275-chip pot. Baumann made the call on the button.

Selbst, now attempting to bait her opponent with a better hand, checked the turn. Baumann obliged and bet 1,700. Selbst responded with a check-raise to 5,800, and Baumann called.

Selbst had a one-outer that never arrived on the river, but she still had every reason to believe her hand of Aces-full-of-Sevens was still tops when an inconsequential four landed. So she bet big, hoping to perhaps make it look like a bluff, this time 16,200 into a pot of 14,600.

That’s when her stomach must’ve turned as Baumann put her all-in.

Most players would’ve snap-called in this spot, but Selbst took a minute to consider the potential that Baumann had quads. She couldn’t have Aces-full, so what else would prompt her to do more than just call?

“How can I fold?” she frustratingly asked before concluding that the odds of her having pocket sevens was less likely than Phil Hellmuth gracefully exiting a poker tournament, she made what was just short of a literal crying call.

If there’s a silver lining for the PokerStars ambassador, busting out of the Main Event an hour into the tournament sure beats being eliminated on Day Three without cashing. So, there’s that.

Paul Senat had an impressive run in the2017 Main Event, finishing in 70th place for $101,444. But soon after his big score, word came out that he might not want to celebrate too much. Senat, 37, was at the World Series while out on bail, awaiting trial for manslaughter. Prosecutors allege Senat accidentally but negligently killed 55-year-old Darryl Rudolph, the father of a former Florida State University football star.

Rudolph was a handyman at a Florida nightclub when Senat accidentally discharged an AK-47 rifle that sent a single bullet through a wall and into the neck of Rudolph, who was in a different room changing an air conditioning filter.

Chris “Jesus” Ferguson made his second appearance at the WSOP since 2010, and he had quite an impressive summer. His performance at the 2017 World Series of Poker in Las Vegas landed him atop the Player of the Year leaderboard, much to the dismay of many in the poker community.

Seeming particularly bothered by his presence there was Daniel Negreanu, who had made big promises (and big bets) about his results at the WSOP, but ultimately failed to really contend in POY standings.

Ferguson, once a crowd favorite before playing a role in the 2011 Black Friday scandal at Full Tilt Poker that left many online poker players without a bankroll, set a series record with 17 cashes in one summer.

But he didn’t win a bracelet and he still hasn’t apologized for his past transgressions. Therefore, many poker players refuse to forgive. But for those who love to root for a villain, Jesus’ POY chase was a thing of beauty.

Scott Blumstein abused Dan Ott in heads-up play in the Main Event, continually using aggression to win pots. But despite the dominant performance, Ott had a golden opportunity to get back in the game.

Holding nearly a 5-1 lead, Blumstein called the 1.5 million big blind bet on the button with A♥2♦. Ott then raised to 8 million with A♦8♦, a dominating hand. Scott then fired a three-bet all-in and after two minutes in the tank, Ott decided it was time to put his foot down and let the poker gods determine his fate.

The flop and turn ran out clean for Ott: J♠6♠5♥7♥. Needing to fade just a three-outer, Ott was ecstatic about the possibility of doubling up. But poker is a disgusting game sometimes. We don’t need to tell you how it concluded, but we will anyway. The 2♥ landed on the river, giving Blumstein the littlest pair but the biggest victory, a river worth $8.15 million.

Ott still went home with $4.7 million so the bad beat wasn’t the end of the world. But it was a memorable end to the 2017 World Series.

I think we all have our bad days where a pocket aces loses from a pocket sevens. There’s always that risk when you decide to bet heavily even though you haven’t gotten anything better for your aces (straight, flush, triple aces, …). But of course aces are very tempting for even the best poker players. Better luck next time I suppose.

That 2 at the river must’ve hurt really bad, to lose from a pair of two’s. Luckily Ott will be able to wipe off his tears with his $4.7 million 😀