It’s official: the WSOP 2017 Main Event has 7,221 entries, the third-largest field in tournament history. Only 2006 and 2010 topped this year’s player participation. The champion will receive $8.15 million, which will be the 10th-largest Main Event top prize. 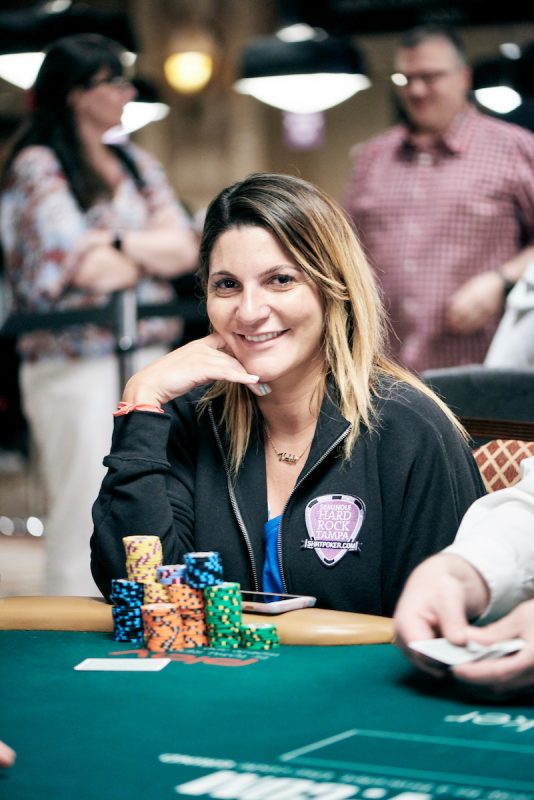 Natasha Mercier was among the chip leaders after Day One in the 2017 WSOP Main Event. (Antonio Abrego/pokerphotoarchive.com)

A massive Day 1C field saw Natasha Mercier (Jason’s better half) bag a huge stack. Among other celebrity player news,  Phil Hellmuth waited until the dinner break to register, and Phil Ivey was reportedly in the UK, handling yet another leg of his Crockford’s baccarat edge-sorting case.

He’s attempting to retrieve the €7.8 million from Crockfords casino that was withheld due to the poker pro allegedly “cheating” to win the money in 2012.

Ivey no-showing the Main Event came as a surprise to many. Some were disappointed, including fellow former Full Tilt Poker pro Mike Matusow.

Jason Mercier, the 2016 WSOP Player of the Year, proposed to his then bride-to-be, Natasha, after she busted out of a Series event last year. This year, the newlyweds both entered Day 1C of the Main Event. Jason appeared on the PokerGO feature table alongside fellow Team PokerStars Pro Daniel Negreanu.

But it wasn’t five-time bracelet winner Jason amassing chips on Day One: Natasha was the one putting on a show. She finished the day with 218,400 chips, good for 12th out of the 4,262 1C entries, a record for that starting flight.

“218k in the bag. Couldnt have dreamt of a better day 1 and had so much fun at a super fun table,” she posted on Twitter.

Jason, on the other hand, had a rough day, bagging barely more than half his starting stack, for 28,400.

Another poker couple, Phil and Farah Galfond, also both bagged chips on Day 1C, almost neck-in-neck. The hubby ended with 71,300 and his spouse finished with 69,900.

Poker Brat Late to the Party

There are three guarantees in life: death, taxes, and Phil Hellmuth being late to register for any year’s Main Event. He did it again on Monday, this time waiting until the evening dinner break. His buddy, Daniel Negreanu, doesn’t approve of that strategy.

“If you are late regging the WSOP main event you are doing it wrong. If you show up on time for any event this year, this would be the one,” Kid Poker suggested on Twitter.

Hellmuth didn’t listen. And why should he ask anyone’s for poker advice? The man has a record 14 WSOP gold bracelets, including the 1989 Main Event title. And his delayed action on Monday didn’t turn out too badly for the Poker Brat. He finished the day in good shape, bagging around 87,400 in chips. He called his  own performance “respectable.”

Day 2AB begins at 11 am PT on Tuesday. Players from the Day 1A and 1B starting flights will come back to the Rio in hopes of advancing to Day Three. PokerGO will begin its coverage at 11:30 am and then switch over to ESPN at 4:30 pm.

Day 1C was packed with big name pros, many of whom advanced to Day Two. The list includes both former Main Event champions and current WSOP Player of the Year contenders. 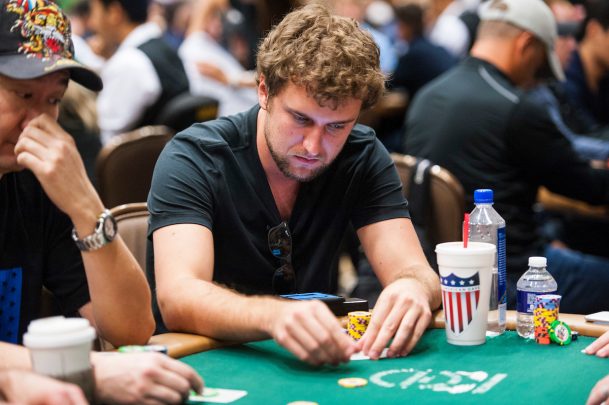 Busting at the Seams

On Day 1B, Vanessa Selbst busted with aces-full against quads. That was a sad hand for the PokerStars ambassador who was celebrating her 33rd birthday that day. But it wasn’t as sick as what we’re about to describe.

Eric Baldwin opened up under the gun with 2♥2♦ and got a call from Laurence Grondin in the big blind, holding A♦J♦. The juicy flop came out 10♦K♦2♠. Grondin bet his royal flush draw and got a call. The Q♦ on the turn gave him the royal flush. Instead of slow playing, he bet out and got another call.

The 2♣ turned over on the river, giving him an impossible-to-lay-down hand with quads. Of course, both players went all-in. Fortunately for Baldwin, he still had over 20,000 chips left after he found out that deuces, does indeed, sometimes lose-s.