The World Series of Poker 2016 Main Event is less than 24 hours away from deciding its final October Nine. Vojtech Ruzicka from the Czech Republic, who’s already had three cashes so far in this year’s WSOP, has a slight chip advantage (26,415,000) over next-best stacker Michael Ruane of New Jersey (24,565,000). 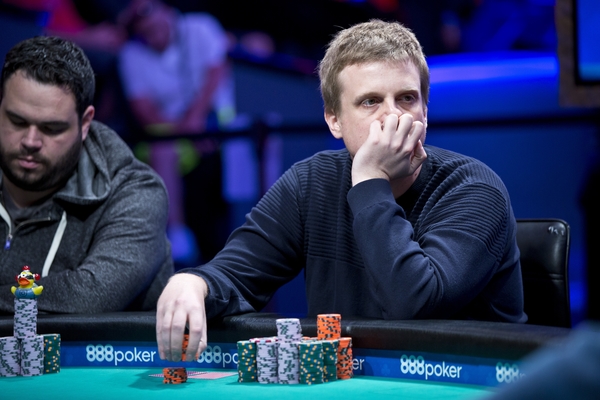 Czech Republic player Vojtech Ruzicka (right) will kick off play on Monday with the biggest chip stacks as we head into the last day of the World Series of Poker Main Event. The event will play down to the final table tonight. (Image: pokerphotoarchive.com)

Jason Mercier may have been unable to win the elusive third bracelet of the 2016 WSOP, but his summer was one for the ages. Paul Volpe busted 29th in the Main Event on Sunday, securing Mercier’s Player of the Year title.

On top of winning two bracelets and being named the top performer, the PokerStars pro proposed to his girlfriend Natasha Barbour after she busted from a tournament, making it a pretty nice consolation prize for her. He also became the talk of the poker world for his $1.8 million three-bracelet bet with Vanessa Selbst.

Yup, it was the summer of Mercier, indeed. Volpe also put on a great show this past month. He cashed nine times, including a 4th place finish and a bracelet in Event #15, the $1,500 Eight Game Mix.

Volpe won’t win Player of the Year, but he was one of the most consistent performers at the 2016 World Series of Poker. Unfortunately for the Philadelphia native, he came up a bit short of making the Main Event final table.

Hands That Make You Go Hmmmm…

We could pick out numerous hands in any poker tournament that don’t make sense. But this hand on Sunday between Jonas Lauck and Michael Niwinski was extremely odd.

Lauck raised from under the gun with K♣J♠ to 725,000. Niwinski made the call on the button with A♣9♣. The flop came A♥9♥5♣, giving Niwinski two-pair and Lauck nothing. After Lauck checked, his opponent put him all-in.

Although a large portion of his chips were already in the pot, this seemed like an auto-fold situation for Lauck, but he made the call, nearly drawing dead. The Q♠ on the turn gave him some hope, but the 3♠ sent him to the rails in 37th place.

Niwinski will start play on Monday in the #15 spot out of the remaining 27 players, with 10,660,000 in his chip stacks. He will be representing for British Columbia in Canada.

Dan Colman, one of the top high stakes online players in the world, had the chip lead at one point on Day Four. But he couldn’t run it up on Day Six. Colman, winner of the 2014 Big One for One Drop, busted in 31st place for $216,211 on Sunday.

Tureniec Wins Little One for One Drop

After Sunday’s action, the Main Event is the lone remaining bracelet to be awarded this year. That will happen in late October.

Michael Tureniec of Sweden claimed the second-to-last bracelet in Event #69, the $1,111 Little One for One Drop. He had never won a WSOP event prior to this tournament.

Tureniec defeated the talented Calvin Anderson heads-up, who had begun heads-up play with a big chip lead, but couldn’t hold on. On the final hand, Tureniec made what some may consider a questionable call and won a 60/40 hand as the underdog.

Tureniec raised to 1,075,000 with Q♠J♠ and his opponent shoved all-in for 11,000,000 with K♠10♦. After a short pause, Tureniec decided to gamble. Had Anderson won the hand, the two would have been in a virtual tie. But the flop came J♦9♥2♣, leaving Anderson desperate for a three-outer to stay alive.

Does anyone know in wich place does dominik nietsche was eliminated?