After two days of play in the WPT Legends of Poker at The Bicycle Club in Los Angeles, there are 67 players remaining going into the start of Tuesday’s play. Jeremy Kottler has a sizeable chip lead with 1,048,000. His nearest competitor, Jamie Rosen, has 780,000. 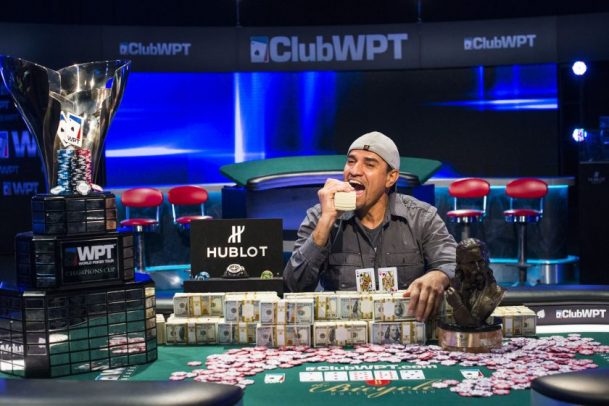 Mike Shariati, the 2015 WPT Legends of Poker champion, is still alive heading into Day Three as he attempts to defend his crown on Tuesday.  (Image:  worldpokertour.com)

Kottler ranks 10th in Ohio for the all-time live tournament winnings list. He won’t come close to catching David Peters for the top spot in the Buckeye State by winning this event. But the $615,346 that first place pays would move him up to 7th place, and put his total live tourney take at around $2 million.

To hold on, the Ohioan must find a way to fend off some who have earned their rank in the WPT Legends of Poker. Olivier Busquet, David Pham, Andy Frankenberger, Blair Hinkle, and former WPT Player of the Year Make Shariati are all coming back for Day Three on Tuesday.

The $4,000 buy-in event, located at one of Southern California’s most historic card rooms, began on Sunday with 687 players. Poker pros from all over the globe traveled to the Golden State to partake in one of the best post-WSOP events of the summer.

“I overthought a play against @AMFrankenberger and I burned up in glorious fashion,” Tuchman posted on Twitter after busting against Andy Frankenberger.

Defending Champ Still in It

Mike Shariati, the current WPT Player of the Year, won this event a year ago for $675,942. He’s still alive, but with a below average chip stack (240,000). But this is no-limit Texas hold’em, where you’re almost always potentially a few hands away from a huge stack. That’s the beauty of the game.

Shariati locked up Player of the Year in Season 14 after he finished 2nd in another Southern California event:  the WPT LA Poker Classic. He won $656,540, giving him more than $1.3 million in 2015-2016 World Poker Tour winnings. Dietrich Fast, a German pro, beat him heads-up for the title.

Play resumes at the Bicycle Club on Tuesday at noon Pacific time. Day Three will play down to the final 18 players. On Wednesday, play will conclude once six players are remaining. The Fox Sports crew will begin filming the action at the six-player final table on Thursday.