The World Poker Tour is invading Canadian households. Last week, WPT Distribution partnered with GameTV, which specializes in game-related programming in Canada. Now, episodes of the WPT will be broadcast across the “Great White North.” 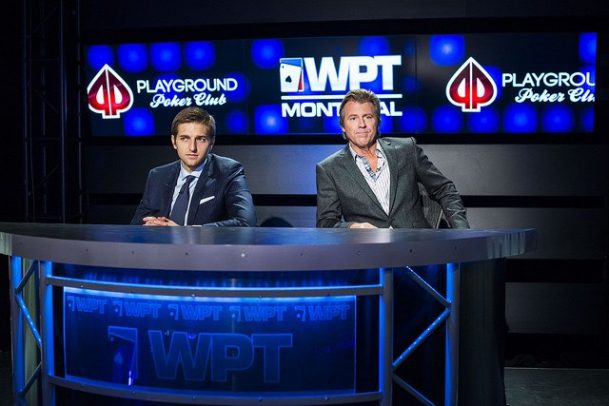 Canadian viewers can expect to see plenty of Tony Dunst and Vince van Patten as their mugs will be plastered in more than 9 million homes. (Image: WPT)

Since May 29, the WPT has aired daily on GameTV and including episodes from Seasons I, II, XIII and XIV. Given GameTV is available from most Canadian service providers on basic packages, WPT episodes will now be inside nine million homes.

“Poker is a global game, and the WPT is a global brand, making the partnership with GameTV, a subsidiary of leading global sports media company Anthem Sports & Entertainment Corp., a perfect pairing as WPT Distribution continues to aggressively expand our international content offering,” said Johnny McMahon, VP of WPT Distribution.

Among the other shows that can be found on GameTV are Dragon’s Den (the Canada and UK version of Shark Tank), Celebrity Name Game, and Betty White’s Off Their Rockers.

While the WPT on TV may be new to Canada, the tour certainly is not. The tour has been holding stops in the country since 2006. The first stop came back in Season 5 when Scott Clements topped a field of 298 entries to win the WPT Canadian Open Championship at Fallsview Casino Resort for $222,524.

The WPT airs on Fox Sports Network (FSN) in the United States.

Poker Coming Back to TV?

The partnership with GameTV is just the latest off-the-felt development involving the WPT. At the end of May, longtime commentator and Poker Hall of Famer Mike Sexton announced he was leaving the broadcasting booth.

That made room for Tony Dunst, who was promoted from hosting The Raw Deal segment to the big boy booth alongside Vince van Patten.

In April, they also set aside any competitive differences to join forces with PokerStars to host the “MonteDam Swing.” That alliance sought to attract players to both the PokerStars Championship Monte Carlo and WPT Amsterdam, and was by all accounts a success.

The partnership also comes at a time when other poker entities are getting in bed with one another. In mid-May, the World Series of Poker formed an extended partnership agreement with Poker Central through 2020 that will see the latter live stream WSOP events on their new subscription-based platform PokerGo.

Additionally, ESPN has committed to airing 40 hours of Main Event live coverage and 130 hours of original packaged shows. That will begin on July 8 with Day 1A of the 2017 WSOP Main Event.

Recent developments have given many hope that poker on TV will rebound after suffering a major setback on Black Friday.