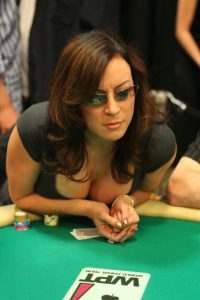 That includes actress Jennifer Tilly.  Her 279,100 chips heading into Day Three was good enough for 2nd place behind Ryan Hughes (364,400).

Tilly’s performance on Tuesday may have been her best since she was nominated for an Academy Award for her role in Bullets Over Broadway in 1994. She lost out to Dianne Wiest but is hoping to make up for it with a WPT title this week.

Poker is a grind. No one knows that more than Tilly, a woman who has competed in many high stakes tournaments and cash games over the years.

“Trying to hold on to my big stack is exhausting! It’s like trying to keep a giant rock from rolling down the hill,” she posted on Twitter.

She needs to hold on to that chip stack for four more days in order to win this prestigious $10,400 buy-in event.

Daniel Negreanu entered this tournament six times. Each entry receives 30,000 starting chips. After Day Two, Negreanu has 183,400, a good 3,400 more than the total number of chips he has received.

Kid Poker is in for $62,400. That means he’ll have to finish in the top 12 to turn a profit. If he doesn’t get his investment back, Negreanu probably won’t lose any sleep or be forced to pawn off his valuables.

Negreanu had a little fun on Day One. He threw some chips around early on with the intention of rebuying multiple times. On his sixth entry, he was finally able to build up a decent stack. On Day Two, he more than doubled his stack size.

Day Three began at noon PST with 270 of the 791 entries remaining. The champion is going to receive $1,938,118. The top two finishers will become millionaires (if they weren’t already).

This event tied the 2007 L.A. Poker Classic for the largest $10,000 buy-in WPT tournament ever. Few poker tournaments ever have had more big name players than the 2016 WPT Bellagio Five Diamond World Poker Classic. Day Three is filled with familiar faces.

she has a pair

Jennifer Tilly shows a nice pair that I am sure will distract many players and that helps here in addition to the effect of trying to be nice to that kind of a Lady.