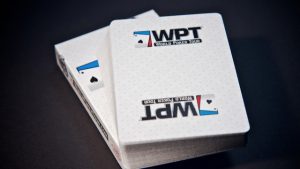 This $10,400 buy-in tournament had 791 entries, 72 of which will go home with money. After Day Three, just 75 players remained with three more grueling days of play to go.

The winner will take home more than $1.9 million. Each of the top two finishers are guaranteed over $1 million.

Ryan Hughes entered Wednesday’s action with the chip lead. All he did on Day Three was increase that lead. He began Day Four with 1,212,500. That’s just over 200 big blinds. He was the only player to surpass 1 million chips on Day Three.

Christian Harder was his nearest competitor at the end of the day (829,500).

Hughes isn’t a household name, but he is no slouch. He made the final table in a WPT event during the 2010-2011 season. Harder has three WPT final table appearances and nearly $1.3 million in career winnings on the tour.

Daniel Negreanu climbed the leaderboard on Day Two after buying into the tournament six times. But on Day Three, he exited stage left.

But there are many prominent players who advanced to Day Four, many with a healthy stack. Justin Bonomo, one of the top performers at the 2016 World Series of Poker, began Day Four with 767,500. And he isn’t the only big name pro in contention.

Chris Klodnicki, another player fresh off a strong WSOP performance, has 586,500. Dan Smith came close to winning his first WSOP bracelet this past summer, but he does have a WPT title to his name. And now he has enough chips to make a run at his second one (467,500).

When Day Four began at noon PST at Bellagio in Las Vegas, 75 players remained. Only two players had to bust before approaching the bubble.

The final table of six players will take place on Saturday.