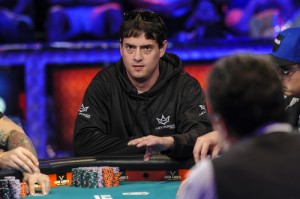 The World Series of Poker  (WSOP) Main Event final table saw miraculous comebacks, shocking eliminations, and millions in prize money awarded as it reduced its field from nine down to just three men who will vie for the most prestigious prize in poker this morning.

After a marathon 12-hour session, Dutchman Jorryt van Hoof emerged as the chip leader, bagging just under 90 million chips heading into the final session of play. He’ll be joined by fellow survivors Martin Jacobson (64.75 million) and Felix Stephensen (46.1 million), with all three players sporting healthy stacks when they return to the tables on Tuesday evening.

The action on Monday night was marked by deliberate play, with the competitors taking few chances and often choosing to avoid confrontation whenever possible.

But after more than three hours of play without an elimination, the action finally started heating up.

Mark Newhouse was looking very likely to avoid a second straight ninth-place finish after chipping up with a flush, but then found himself with pocket tens against the pocket queens of William Tonking. On a 2-4-J-4 board, Tonking checked and Newhouse bet 4.5 million. Tonking called, and after a jack on the river, Newhouse moved all-in for his last 10.2 million. Tonking went into the tank and made the call, making Newhouse the first final table elimination for the second straight year.

It would take two hours more before a second player would hit the rail. After Tonking and van Hoof had established themselves as the two chip leaders, the short stacks took turns risking their tournament lives before Bruno Politano would eventually be called by Felix Stephensen. Politano had two overcards with QT against Stephensen’s pocket sevens, but never improved, ending his tournament in 8th place ($947,142).

With the blinds rising and most of the stacks getting shorter, the pace of play quickened (much to the delight of the crowd, which seemed to be growing restless due to the lack of eliminations).

The next to go would be Dan Sindelar, who moved all-in preflop with pocket jacks. Van Hoof made the decision to call with A3 of hearts, and was delighted to virtually put the hand away on the flop when he received not only an ace, but also two hearts to go along with it. Sindelar couldn’t find the one non-heart jack that would have given him back the lead, and went out in 7th place ($1,236,084).

Andoni Larrabe would go out shortly after the third break of the night. After a raise by van Hoof, Larrabe shoved for just over 8.3 million with JT of clubs. Van Hoof made the call, revealing the K5 of hearts. A flop king had Larrabe in severe trouble, and neither the turn nor river improved his hand, knocking him out in 6th position ($1,622,080).

Billy Pappas was one of the most entertaining stories of the night, as he doubled up twice to go from the shortest stack to second place in the chip standings.

But his run came to an end in spectacular fashion when Martin Jacobson moved all-in for over 24.4 million chips from the button. Pappas then called from the small blind, revealing AJ against Jacobson’s pocket fives. A five hit on the flop, giving Jacobson a hammer lock on the hand. That loss left Pappas with just 50,000 chips, far less than the 150k ante required at the time. Pappas would be eliminated on the next hand, but collected $2,143,794 for his fifth place finish.

With just four players remaining, Tonking moved all-in with pocket twos, only to be called by Jacobson’s pocket tens. Tonking was at risk in the battle between the two shortest remaining stacks, but he made things interesting when the flop came 4-5-J with all clubs. That gave him a flush draw, while a six on the turn also gave him a chance at a straight. But the queen of spades was a blank on the river, eliminating Tonking in 4th place ($2,848,833).

As the session closed in on the 12-hour mark, the WSOP gave the remaining three players a chance to play down to two, but it was not to be. The tournament was halted at around 4:30 am PT with the three remaining players all coming back to the final night of play to compete for the WSOP bracelet and the $10 million first prize.

All three remaining players have guaranteed themselves prize money of at least $3,807,753. Play will resume at 6 pm on Tuesday night, and continue until a winner has been crowned. We will be there to follow all the action, of course.

I would love to final table a WSOP!!! Would be the ultimate….