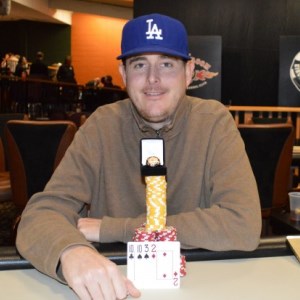 Poker player Chan Pelton was all smiles back in February when he took down Event # 9 at this year’s WSOPC in Palm Beach. He has since been stripped of the title and cash.

On February 16, Chan Pelton won his second World Series of Poker Circuit ring in Event 9 of the series at the Palm Beach Kennel Club (PBKC). But by removing a poker chip from the table during the heads-up portion of the tournament, he violated one of the rules of the WSOP. He claimed that he wanted the chip as a souvenir, but the violation resulted in a loss of the title, prize money, and future poker opportunities.

As Pelton was careening to victory in the $365 buy-in Pot Limit Omaha Eight or Better tournament at the Palm Beach Kennel Club, he chose to remove a poker chip from the table before play was over. The action was verified by the poker room’s surveillance cameras, and Pelton said that he wanted the chip as a souvenir of the tournament, despite being aware of the rules against such an action. Pelton did win the tournament for $12,181 and the gold WSOPC ring, and it was acknowledged that the missing chip did not impact the tournament results.

The management of the Palm Beach Kennel Club and WSOPC were none too willing to let the matter go, however, as the rule was made clear to players in every tournament. Ultimately, the PBKC poker room management team made a decision about the violation of WSOP Tournament Rule 39 that the player’s intent was irrelevant. Pelton was subsequently disqualified from the tournament “effective the time the act was confirmed to take place” and forced to forfeit the prize money. The second place finisher, Jeffrey Green, was then declared the winner and awarded that prize money, as well as the first-place points for the WSOP National Championship. The rest of the money was redistributed to the other players who had cashed in the tournament.

The February 26 statement from PBKC quoted Card Room director Noah Carbone as saying, “The integrity of our games is of utmost importance and regardless of the intent in question from this incident, we cannot sit idle and risk the stolen chips being re-introduced in the future.

“If rules infractions occur, we view incidents as the worst case scenario plausible, and as such impose penalties governed by our rules to ensure the best possible outcome for all players in the future and to best ensure integrity of events on a going-forward basis,” he added.

Pelton was also banned from all future events at the PBKC, and from the property itself.

On the heels of the PBKC decision, the World Series of Poker released its own statement on the matter later that day. Not only would the WSOP honor the decision of the PBKC, but it chose to impose its own sanctions on Pelton.

While not naming Pelton but referring to him as “the individual who admitted the theft and violation of tournament rules,” the WSOP stated that he would no longer be eligible for the $1 million season-ending National Championship. He was also served an indefinite suspension from all WSOP-related events at all Caesars-owned properties. The company-wide casino ban prohibits Pelton from entrance to any of those properties in the future at the risk of being arrested for trespassing. The WSOP also intended to make any non-Caesars-owned properties that participate in WSOP activities aware of the incident.

The statement also read, “We strive to give poker players of all levels a fair and equitable opportunity in our events. Anything that impacts this objective will be dealt with using the full extent of our rules, regulations and law enforcement tools at our disposal.”

Silence of the Grinder

Pelton has not responded publicly to the incident. But a peek at his live tournament results shows a total of live tournament earnings that exceeds $250K (not excluding the recent revocation of the WSOPC money), all consisting of relatively low buy-in events.

His largest score came in 2009 when he placed second in a Venetian Deep Stack Extravaganza $1K NLHE event for more than $55K. He also has accumulated numerous titles through the years, starting with a 2009 win at a Hard Rock Poker Open event in Tulsa. He won a 2011 tournament at Thackerville for $20K and his first WSOPC event at Choctaw in January 2012. In 2013, he claimed victory in the Card Player Poker Tour Choctaw PLO event.

Rules are rules, but it does seem a bit harsh to ban him from all wsop events..

Can you say harsh… Sounds a little over the top for 1 chip. Not saying I condone his actions but there could have been a more reasonable outcome imo.