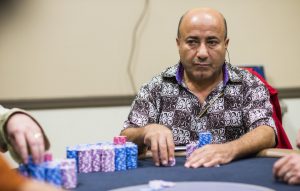 The World Poker Tour has a plethora of events on the horizon this coming month, starting with the WPT National in Montreal, Quebec. At the start of Wednesday’s action, 44 players remained with two days of play left.

August 27 is the start of one of the top World Poker Tour events of the year:  the WPT Legends of Poker. This events takes place in Los Angeles at The Bicycle Club Hotel & Casino, home of one of the top poker rooms in the state.

The final table in this $4,000 buy-in tournament is set for September 1. It will be televised at a later date on Fox Sports, hosted as always by Mike Sexton and Vince Van Patten. Many of the game’s best players are expected to descend upon Southern California for this tournament.

Mike Shariati was the winner in last year’s tournament for $675,942. He defeated the legendary Freddy Deeb heads-up for the title. Shariati had quite a run during WPT Season 14. He also finished 2nd in the $10,000 buy-in LA Poker Classic for $656,540. Dietrich Fast, a top high stakes pro, won that event for $1 million.

The Borgata in Atlantic City is the biggest and most popular poker room in the city. It’s also home to the highest stakes tournaments in town.

On September 18, the WPT Borgata Poker Open will kick off. The buy-in is $3,500 and the WPT is guaranteeing a prize pool of at least $3 million. This one will also be televised at a later date on Fox Sports.

There were 1,027 entrants in this tournament last year. David Paredes took it down for $723,227. The Massachusetts resident has over $2 million in lifetime live tournament winnings, including a few cashes in WPT events since his Borgata title.

Paredes is a tough out in this tournament. In 2014 at Borgata, he was the runner-up for $499,549. There won’t be many players who hope to see him at their table in September.