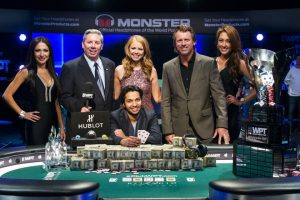 The 14th season of the World Poker Tour (WPT) got underway months ago, but has yet to air on television. Come February 28th, that will all change.

That’s when FOX Sports Networks (FSN) will begin to air Season XIV of the WPT, followed by a new episode each Sunday evening at 8 p.m. WPT will bring back popular hosts Mike Sexton and Vince Van Patten, who have become the de facto faces of the broadcast, in the same vein as Norm Chad and Lon McEachern for the World Series of Poker (WSOP).

This season will feature 27 episodes running weekly through the final Sunday of August. Season XIV’s slate includes many major poker events, including the Five Diamond World Poker Classic at Bellagio in Las Vegas, the L.A. Poker Classic at Commerce in Los Angeles, and the WPT Tournament of Champions at Seminole Hard Rock in South Florida.

The television coverage later this month kicks off with the already completed WPT Choctaw, which took place in Durant, Oklahoma. Each of the nine tournaments on the WPT schedule will be televised as a three-part series.

Returning for her third year as a WPT reporter is Lynn Gilmartin. While Sexton and Van Patton are veritable fixtures for the broadcast, WPT has gone through a bevy of women over the years, from former Miss Hawaiian Tropic and ex-Van Patten sister-in-law Shana Hiatt to current L.A. news anchor Courtney Friel and on from there.

Gilmartin is the fifth female reporter in the show’s 13 years on the air, and is going into her third year with the show. She arrived already an experienced TV poker host with solid credentials from her days with the EPT and Asia Pacific Poker Tour, among others.

Suave player Tony Dunst is back for his sixth year as the host of the popular Raw Deal segment, which airs weekly during WPT coverage.

Created in 2002, World Poker Tour first aired in 2003, the year Chris Moneymaker put TV poker on the map for the competing World Series of Poker, and it’s been televised annually ever since.

Each year, some of the top poker players in the world compete in a series of high-stakes events around the world, hosted by the WPT. Players accumulate points based on order of finish at each tournament in hopes of winning the coveted WPT Player of the Year award.

Over the years, some of the game’s greatest players have achieved this honor. The first winner was none other than now-disgraced poker pro Howard Lederer. He passed the torch to Erick Lindgren in 2003. Season III winner also happens to be the top money winner of all time, Daniel Negreanu.

No one has ever won Player of the Year twice. The defending champ, Anthony Zinno, also had an impressive run during the World Series of Poker in 2015. If he runs even half as well as he did last year, the WPT just might have its first two-time Player of the Year.

The first-ever WPT event winner was Gus Hansen, back in 2002 at the Bellagio. The “Great Dane” won $556,450 in that tournament, beating out a final table that included some heavy hitters, including Poker Hall of Famer John Juanda, John Hennigan, and Scotty Nguyen.

Will look for it on Sundays, better than the nothin than ESPN is giving us…