World Cup Contenders Start to Emerge After Second Round of Matches

With the final round of group stage matches coming up this week, there’s still plenty of drama left at the 2018 FIFA World Cup. But with six teams having already clinched a spot in the knockout stage, and eight others already sure they won’t advance, the picture is starting to clarify a bit, and some clear favorites have begun to emerge from the pack. 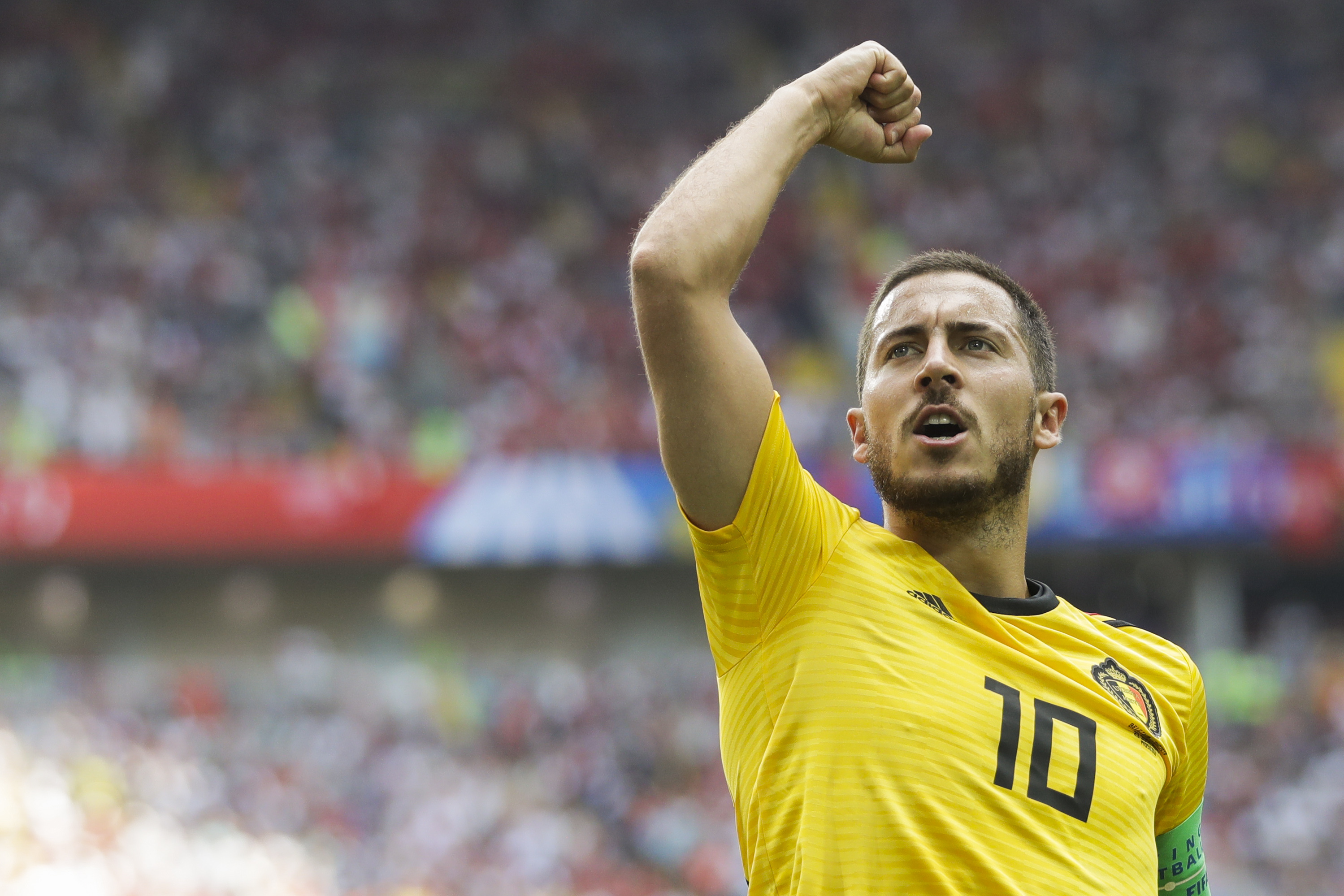 Eden Hazard celebrates after scoring Belgium’s fourth goal in a 5-2 victory over Tunisia on Saturday at the 2018 World Cup. (Image: Matthias Schrader/AP)

Some of the world’s top teams have struggled in the early going, leaving oddsmakers unsure about whether they’ll even get into the knockout round, let alone contend for a world championship. On the other hand, there have been a few sides that have looked downright dominant in their first two games.

Nothing Certain for World Cup Favorites

Surprisingly, the top three favorites at most bookmakers are a trio of teams that have yet to clinch advancement. At William Hill, Spain and Brazil are the current co-favorites, each being given 9/2 odds of lifting the trophy at the end of the World Cup.

But while both teams are in excellent shape heading into their final group stage match, nether has clinched anything just yet. Spain is all but assured of advancement: a draw against Morocco would be enough to see them through, and they could very well advance even with a loss on Monday afternoon. Brazil’s situation is similar, though they’ll likely need at least a draw against a tough Serbia side to go through.

The third favorite is Germany (13/2). The Germans were stunned by Mexico in their first match, and then were seconds from only earning a draw against Sweden, a result that would have put them at serious risk of elimination. But a late stoppage-time goal from Toni Kroos gave them a critical 2-1 victory on Saturday.

Germany will now face South Korea in Thursday. The Germans would clinch advancement with a two-goal win, but could potentially move on to the knockout stage with a draw or even a loss in their final match. Germany is a 1/6 favorite to win defeat the South Koreans.

While those sides may have work to do, a second group of contenders already know they’ll be playing in the Round of 16.

France (8/1) has been steady, if not overly impressive, scoring a 2-1 win over Australia and a 1-0 victory over Peru to clinch advancement out of Group C. Supporters will want to see more out of Les Bleus, but France has done enough to remain in the conversation so far.

Group G has produced two powerhouses, as Belgium (15/2) and England (10/1) have both easily scored two wins and ran up a plus-six goal differential to easily advance to the next round. There will still be a lot of interest in their head-to-head match on Thursday, however: most of the World Cup bracket will already be in place by the time they play, and there’s a strong possibility that the team that finishes second in their group could end up with what looks like an easier draw.

Finally, those looking for a dark horse may want to keep their eyes on Group D, where Croatia (14/1) has looked impressive in victories over Nigeria and Argentina. Croatia is already through to the next round even before their final match with Iceland, while perennial contender Argentina (20/1) will need a win against Nigeria to keep their World Cup hopes alive.

with the arrival of VAR yesterday, 19 penalties were scored in this year’s football game, as a commentator said here in Greece, the game has been turned into a circus, as it is a long time to lose! this naturally favors the weaker teams as repetition of the phases can have something to win!!

Very interesting and exciting Championship, a lot of surprises .. Serbia was not at the required level 🙁