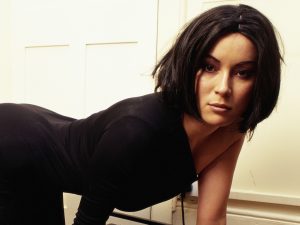 Jennifer Tilly is up for Women in Poker Hall of Fame nomination. (Image: Fanpop.com)

The Women in Poker Hall of Fame wants you to help determine who will be inducted into its class of 2016. Yes, you. This will be the seventh WIPHOF class, but the first time fans are allowed to vote.

You have until May 13 to place a vote for one of the seven finalists:  Jennifer Tilly, Debbie Burkhead, Karina Jett, Mandy Glogow, Esther Rossi, Shirley Rosario, or Victoria Coren-Mitchell.

To cast your vote, simply head over to the WIPHOF website and choose just one candidate you feel best deserves induction. The nominee who receives the most fan support will earn 10 votes. Current members of the WIPHOF and a separate committee will determine the remaining votes, each individual accounting for 10 votes total.

At the end of the month, an announcement will be made letting us all know the results of the voting. On July 6 at Gold Coast Casino in Las Vegas, an awards ceremony will take place and a few lucky ladies will be honored as the class of 2016.

The event is open to the public. A ticket costs $45 in advance and $50 at the door on the day of the ceremony, and includes lunch.

The seven finalists bring a wealth of poker experience to the table. They were also nominated for being strong advocates of women in poker.

Each candidate has a different poker story to tell.

Karina Jett:  The wife of poker great Chip Jett, Karina has accomplished just as much as her spouse. She was a popular player during the poker boom era.

Debbie Burkhead:  A seven-card stud specialist, Burkhead has been crushing cash games in Las Vegas for the past 20 years.

Mandy Glogow:  Mandy is an industry professional, not a player. She received a nomination for her role as Supervising Producer of the WPT where she has worked hard to bring female personalities into poker television production.

Shirley Rosario:  Rosario is the former owner of the site Poker-Babes.com, a place that honored women for their accomplishments on the felt, and not for their outer appearance. She has done wonders for attracting women to the game.

Esther Rossi:  Perhaps we are saving the best for last. Rossi just might be the most accomplished player on this list. For over 30 years, she has been crushing Stud cash games. And that doesn’t even include her six WSOP final table appearances.

The class of 2016 will join an impressive list of ladies. Those inducted will have their names listed alongside the likes of Jennifer Harman, Barbara Enright, and Susie Isaacs.

The WIPHOF kicked off in 2008, inducting 2-4 members ever since (except 2013 and 2015). The first class included Enright, Isaacs, Linda Johnson, and Marsha Waggoner.

There were no inductees last year but, in 2014, Allyn Shulman and Deborah Giardina were selected. In total, there are 17 current women in the Hall.

Has she won much, or just another ambitious piece of ass to be inducted?